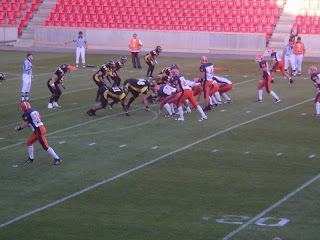 OK - so yes, Ice Hockey is big in the Czech Republic - no big surprise there. Football (soccer) - sure - it's even worth rioting about on occasion. But what about a real American import - American Football? We're happy to report that the game is alive and well here in the Czech Republic. The Czech League of American Football's "Maxima Bowl XV" took place last Friday - between the Prague Lions and the Prague Panthers. We decided we'd root for the Lions - as they had prettier uniforms.

The attendance at the brand new Eden Stadium was nowhere near capacity crowd of 21,000 - but still the turnout wasn't shabby - around 3,000 diehard Czech fans made the trip - up considerably from the 800 or so that show up at a a typical CLAF game. For these guys, this is pretty big stuff... a new arena, 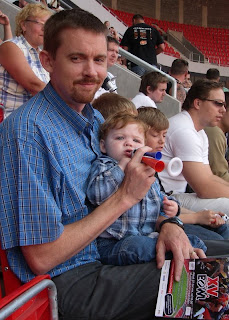 fireworks, the opening kick booted by the American Ambassador, a totally obnoxious band playing during the breaks in action... and most importantly... "EIGHTY CZECH CHEERLEADERS!" The MC, wearing a football-sized pendant on a silver chain around his neck, made sure to announce the number each time the 80 cheerleaders took the field.

There were a couple token Americans on both teams (and in the crowd), but for the most part, both the players and the spectators were Czech - completely immersed in the American world of first downs, penalty flags and scrimmage lines.

The cheerleaders, of course, were Danna's favorite. Jad and Kyler were far more interested in the noisemaker horns they passed out to everyone on the way in. Erin and I just soaked up the Czech-American atmosphere. Bramborák , Klobasa, Gambrinus and... Football? Final score: Lions 14, Panthers 21. See y'all again next season, y'hear?
Posted by Kevin at 9:42 PM