The Happiest Place in Europe - Fantasyland

Part 3 - "Fancyland"
The third in a series of posts on how to get to, enjoy and make the most of Disneyland Paris 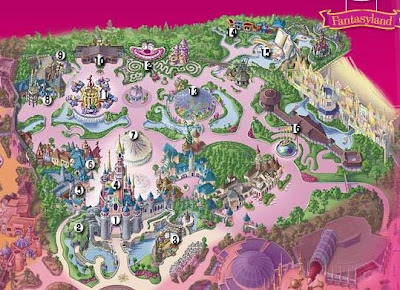 Ok - so let's cover the important things first. "Fancyland" (Danna's interpretation of the name) is all about Princesses. The Princesses all live in the pink castle, and come out during the day to greet the little princesses that come to visit (like Danna). Sure there are rides and things, but it's really all about the Princesses. Of course if you're a five year old boy, Princesses are not really your thing. Fortunately, there's also a "real live" (well, as real as they come) DRAGON - living right under the castle. Fortunately they keep him well fed on things other than Princesses. 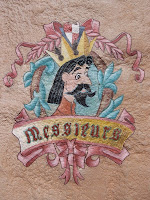 Technically the castle is Sleeping Beauty's Castle, or even more properly, Le Château de la Belle au Bois Dormant. It's pink because Michael Eisner decided that a "normal" white castle just wouldn't stand out well enough against the "dull Parisian skies". The castle is hard to miss - a good thing, because it's also the main entrance to Fantasyland.

In this, and the following reviews of the other Disney Paris "lands", I'm going to break things down three ways. No Wait Entertainment lists things you can do without waiting in line - things to keep the munchkins busy while you wait for your next FastPass ticket to take effect, for example! Next up are the rides. Finally - some info on the shows held in the land. Interested in the food options? Check out the official Disneyland Paris site for more details. The numbers match the map at the top of the article. 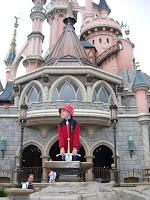 (1) Sleeping Beauty's Castle - good for a quick walk through, though the ground level is mainly buying opportunities. Walk through the castle to the Fantasyland side and you'll find a raised dias with Lancelot's sword stuck in an anvil. Are you pure of heart? Give it a tug and find out! This is also where you'll find a mini-show - Snow White and her courtiers come out periodically to give you a low-key rundown of life in the castle.

(2) Tucked below the castle's drawbridge (to the right of the main gate) is the Dragon's lair. The dragon is one of the best animatronics at the park... and in the gloom (and mist) of the lair, almost makes you believe you're his next meal! 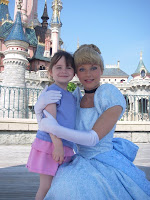 (4) Sleeping Beauty's story is told on the first floor of the castle - through stained glass murals, tapestries and illustrated books. Make sure your French is up to snuff though - 'cause that's all you'll see up here.

(12) Alice's Curious Labyrinth is a good place to get lost for a while. Danna - ever the intrepid explorer lost... us for several minutes. I don't think she even realized she (or we?) was lost. The winding paths through hedgerows tall enough to keep me from cheating are fraught with dead ends, secret passageways and "curious" characters from Alice in Wonderland. Make your way past the Queen of Hearts and her card soldiers to to the "Bubbly Castle" at the end of the maze for a great view of the park - oh and don't forget to snap your picture on the thrones outside the maze! 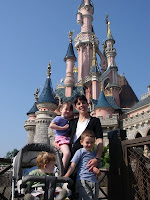 (5) Blanche-Neige et les Sept Nains (aka - Snow White and the Seven Dwarves). This was the first ride we went on, and once was plenty. Your cart rides roughly down the track, jerking and stopping suddenly to display life-size dioramas of the Snow White story. It's dark, and moves too fast to absorb what you're seeing... which is not a bad thing, because for short folks, it's a little bit scary as well. For some reason, the majority of the ride takes place in the spooky forest, with branches reaching their twiggy fingers out to snag you... while poor Snow White huddles pitifully below. Not much fun, but probably one of the shortest lines in the land. (No FASTPASS)

(6) Les Voyages de Pinocchio - one step up from Banche-Neige's jerky story ride, but not a big step. This ride tells the story of Pinocchio - though you might want to read up on the non-abridged version before you jump on. Lots of detail on parts of the story that we weren't as familiar with, and sadly, no journey inside the whale. Sigh. 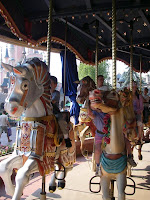 (7) Le Carrousel de Lancelot - a surprisingly long line (10 minutes?) in the sun for a quick ride on the carousel. Mark your steed as it slows down, and then make a beeline for it when the gates open - it's a mad rush!

(8) The only ride in Fantasyland with a FASTPASS system is Peter Pan's Flight, and with average wait times of 45 minutes while we were there, it's a good thing. Grab your FASTPASS though, and you fly directly to your pirate ship. Sprinkle a bit of pixie-dust, and you're off on a magical ride in the nighttime sky above London. As you descend through the clouds into Never-never land, watch out for the cannonball headed your way!

(11) Dumbo the Flying Elephant may be the only time you'll have the opportunity to fly on an elephant... but you gotta be patient. It's another 30 minute wait for a quick minute of air time. This ride is probably best described as a "fun-fair" ride. Get in the elephant. Move it up or down while it "flies" around and around. Get out of the elephant. Whoopie-do! 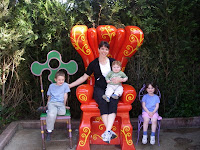 (13) The Mad Hatter's Tea Cups are a dizzy spin and a lot of fun! Sit in the teacup and see how fast you can spin yourself. Warning - this one isn't for anyone who has a problem with spinning! Just try to walk a straight line when you're done!

(14) We didn't actually make it on Casey Jr. - le Petit Train du Cirque, but it looked kind of fun. It's a gentle ride on a little train that might keep the little ones entertained for the duration...

(15) Le Pays des Contes de Fees (Lands of Fairytales). The plus side? You embark via rotating dock into a boat, without too much of a wait. The downside? The boat takes you past poorly maintained models of various fairytales - Belle's (from Beauty and the Beast) village, the cottage from Peter and the Wolf, etc. There's obviously a reason this ride is hidden way back in the "back 40" of the park.

(16) It's a Small World After All - OK... love it or hate it, I challenge you to walk out of this ride without humming or whistling the tune at least once in the following hour! It's bright. It's cheerful. It's neon. It's cutsy, cutsy, cutsy. I think the dragon needs to pay it a visit during lunchtime! Oh - and it has a totally fromageous display from its sponsor France Telecom at the end.

(3) Disney Princess - so it's not really a show, but it is your mini princesses' chance to meet a "Weal Live Pwincess!" The line starts early - so this is one of those things you may want to use an "Extra Magic Hours" entry for. Get in line with a good book to hold your place before the crowds arrive. When the Princess arrives, have your little princess join you until its your turn. I have to admit - it did look a little strange - I was probably the only guy waiting in line to see Cinderella - with no kids.

(3) Winnie the Pooh - Same deal as the Disney Princess meet 'n greet - except for this time you're meeting a big yellow bear who likes "hunny." It's intresting to note that in French, his name is "Winnie the Bear" - who ever came up with "Pooh?"

(4) Once Upon a Time Sleeping Beauty - this show caught us (and most other guests) unaware (read no big crowds). Held on the mini-stage / rotunda just on the Fantasyland side of the big pink castle, this lip-synched musical story of Princess Aurora (AKA Sleeping Beauty) may be worth it if you happen to be in the neighborhood - but I wouldn't plan your day around it. 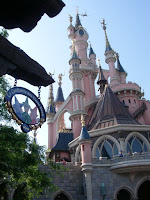 (10) Winnie the Pooh and Friends, too! Sorry - missed this one. While we were there, this one was performed only on the weekends. Too bad... a big yellow bear... honey... a bouncing Tiger. What not to like?

(3) The Disney Once Upon a Dream Parade isn't technically a show, and isn't really in Fantasyland... but, Fantasyland's the best place to watch it. While most of the park stakes out a spot on the sidewalk along main street, head Fantasyland's Theatre du Chateau (where you meet the Princesses) and claim a bench. Kids have reserved seats on the front row for the best view. This parade packs it all in - Disney Princes, Princesses (all of them), Heros, Villians and much more. One of my favorites were the spring-assisted acrobatics - several of the characters (Tigger was one) wore these neat spring-assisted-shoe things - kind of like weird, jointed pogo sticks you strap on your feet. They could easily bound 3-4 feet up in the air on these.

The Once Upon a Dream Parade is a great chance to avoid long lines on the park's most popular rides. While the rest of the guests are watching (or waiting for) the parade, make your move to the popular rides elsewhere in the park. This is an especially good time to hit the rides that don't have FASTPASS options - Pirates of the Carribean, Autopia, etc. If you plan things carefully, you can watch the parade near the beginning (see above), and then make a sweep through a mostly-deserted Fantasyland once the parade moves on down Main Street.
Posted by Kevin at 9:36 PM