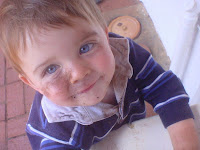 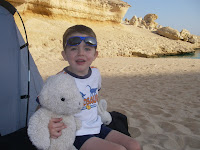 I'm sure it was just the other day that we brought Jad home from the hospital in Dubai! Just a month or so ago that he was tasting dirt in Zimbabwe. It couldn't have possibly been more than a week ago that he was splashing in the surf of the Persian Gulf in Muscat. It doesn't really seem possible that our little boy started Kindergarten today!

But there he was this morning - in his new school clothes, his Wall-e backpack in one hand, a note to his teacher in the other, raring to head out the door to class! He crawled in to our bed this morning at 5:30, telling us that he couldn't sleep... yep, he was excited!

It was a day of learning new rules, making friends, and figuring out how things work in this wonderful new world called school. He informed us that he met one friend who was a girl who had a "really cute voice" (he didn't remember her name though.) Oh - and that he wants to go back tomorrow!

So - our first graduation has now officially taken place - from the "School of Mom" to the International School of Prague. Jad's first step of many to come... on a journey away from the shelter of home and into the big, wide world that awaits him! Jad's ready! But are we? After five years of sheltering him in the secure surroundings of home, are we ready to let this boy of ours take his first tentative steps into the big wide world?

He'll meet bullies and have to figure out how to deal with them on his own. He'll bring home new vocabulary (not all of it good), and learn that you can't always win. He'll make mistakes, and have disappointments. Find new friends... and loose friends. Skin his knee when we're not around to slap on a band aid. He'll see things he's never seen before, and make discoveries all by himself. And continue to travel... down the path we've started him on... towards becoming his own person.

Travel well, Jad - and know we'll always be just a couple steps away!
Posted by Kevin at 11:01 PM 1 comment:

So - it's been a while since we've been on a date night... April 13th, according to our Blog records!

This one was more of a "working" date night. Our job? To explore a new neighborhood so that we could do our jobs as sponsors a bit better. In the line of work I'm in, folks come and go with surprising regularity... a sponsor is your friendly face on arrival in a new place - whether it be New Delhi, Harare or even Prague! Someone to show you where the fuse box in your new house is, where to dash off to at 8 in the morning if you're out of milk, and, most importantly, where to find the closest plate of hummus. We're due to sponsor a new family who will be living in a different part of town, and we had no idea where the closest Lebanese restaurant was! Fortunately, given that we're talking about Prague 6, it wasn't a terribly difficult task.

After wandering around the neighborhood for a while, discovering the closest metro and tram stops, the location of the nearest potraviny (Czech mini-mart), and other essentials, we decided it was time to sample the local Lebanese cuisine. U Cedru ("at the Cedar") restaurant, on Na hutích street just off Dejvicka circle, hit the spot perfectly! On a balmy summer afternoon, very few things could beat a table outside, a plate full of Lebanese mezza, hummus and arabic bread, and a tall pivo. The food was great - the only downer being the slightly stale bread which tasted like it had been broken out of the bag a day or two before. For desert we had their baclava - a sticky, sweet pastry, washed down with a couple cups of Arabic coffee - the kind that's so strong you could almost eat it with a fork.

This is the second Lebanese restaurant we've sampled in Prague - it's a little less "upscale" than El Emir, which translates to a little cheaper as well - Czk 900 for the two of us - that's almost cheap by Prague standards!
Posted by Kevin at 10:36 PM 1 comment: