The Happiest Place in Europe - Discoveryland

Part 4 - Discoveryland
The fourth in a series of posts on how to get to, enjoy and make the most of Disneyland Paris 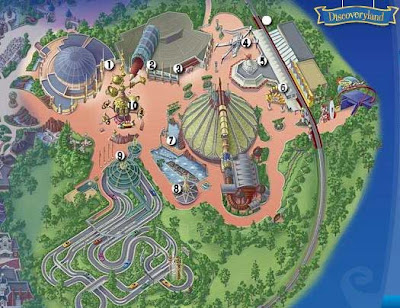 Discoveryland is Jad's kind of place. With rocket ships, Space Rangers, and a retro-futuristic space cannon, this place is the stuff of boy's dreams (myself included!)

In addition to the futuristic rides, Discoveryland's Videopolis theater is the venue of one of the park's most popular shows - "The Legend of the Lion King" (come early if you want a seat).

In sheer numbers of rides available, this land's a small one - but the rides have great "repeatability", and most are well equipped with FastPass stations.

(2) Videopolis - no wait when there's no show in progress, of course! The theater is divided into two parts - the "good seats" for the show in the lower half, and tables with a view of the stage above. The tables are a great spot to stop for a bite to eat. There's food available - the typical limited quality / maximum price fare of the park. Looking for shade and a spot to crash while waiting for your FastPass slot? This may just be the ticket!

(3) & (5) Arcade Alpha, Arcade Beta & L'Astroport Services Interstellaires - two video game arcades with futuristic themes. The first is in the lobby of the Videopolis theatre, the second at the exit for the Star Tours ride.

(8) Les Mysteres de Nautilus - (the mysteries of the Nautilus) that's Captain Nemo's Nautilus, of course - as in 20,000 leagues under the sea. This is a great "walk through" attraction. You descend into the ground to cross "underwater" to the Nautilus submarine - parked in a lagoon in front of Space Mountain. Once on the ship, you tour through the Captain's stateroom, the grand salon, engineering, and more. Pause along the tour to peer out into the murkey depths as a giant squid attacks the ship. Great fun - but a little dark and "spooky" for the little ones until they've been through it a couple times. Oh - and it's a nice refuge from the summer heat too!

Rides
(1) Buzz Lightyear Laser Blast - for sheer interactive fun, this ride wins the award, hands down! You ride in Star Cruisers, equipped with laser pistols - spinning 360 degrees through the ride battle the evil Emporer Zurg and his minions. Your cruiser keeps score as you hit targets - so aim well! I think we went on this ride 5 or 6 times - becoming veteran Space Rangers by the time we were through. This is one of those rides where the line moves fast, and the wait is entertaining. You snake through Buzz Lightyear's base, studying diagrams of the galaxy, reading about the dastardly deeds that Emporer Zurg is up to, and even getting a personal pep talk (in French and English) from Buzz himself before clambering in your cruiser. Here's what it looks like:

(4) Star Tours - this is another attraction where the wait in line is almost as entertaining as the ride itself. The line queues through an "active" space port, where "R2 units" are making last minute repairs to spacecraft, C3P0 is commenting on the state of affairs, droids are being repaired in a busy workshop. You're finally ushered into the boarding area and onto your Starspeeder 3000, headed for the moon of Endor. Unfortunately, your robotic pilot Rex is a few lessons short of his commercial Starspeeder license, and before you know it, you've taken a wrong turn down a maintenance tunnel, landed in the middle of an astroid field, been very nearly sucked into an Imperial Star Destroyer, and finally, assist in destroying the Death Star... all before finally touching down, just a little shaken up, at your destination. I think Jad and Danna were both convinced that we actually shot up into space for a while... until the third or fourth time around when Rex still hadn't learned how to pilot his ship!

(7) Space Mountain: Mission 2 - Take your seat and strap in - this coaster is one wild ride. You're first loaded into the space cannon - then shot off into "outer space" - flying through the dark past planets and moons before jerking to a stop 2 1/2 minutes later. You'll be inverted twice during the short ride - though it's a little hard to tell in the dark. Grab your FastPass for this ride - it's one of the Park's most popular.

(9) Autopia - This is one of the few rides we didn't make it on - the line was always too long, and there was no FastPass option. If you make it through the line, you get to "drive" mini cars along a track.

(10) Orbitron - Very similar to Fantasyland's "Dumbo" ride - just swap the flying elephants for flying space ships. Go up. Go down. Get out.

The Once Upon a Dream Parade in neighboring Fantasyland is a great chance to avoid long lines on the park's most popular rides. Hit the lines for the rides like Space Mountain and Star Tours during the parade, and what can usually be a long wait turns in to a walk right to the attraction.
Posted by Kevin at 10:01 PM