The Happiest Place in Europe - The Basics

Part 2 - The Basics
The second in a series of posts on how to get to, enjoy and make the most of Disneyland Paris

Disneyland Paris (renamed from "Euro Disney" in 1995) is made up of four main themed "lands" - color coded in the map above. Fantasyland (or "Fancyland" as Danna called it) is where the Princesses live - very important if you're a four-year old girl. The pink castle also has a resident dragon living underneath it, which makes the land slightly more interesting to five year old boys. 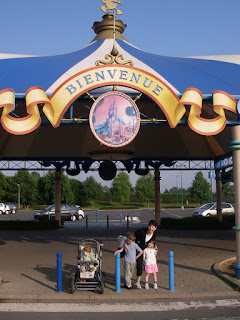 Adventurland is my kind of place - all about pirates, steamy jungle adventures and expeditions into the unknown. Frontierland brings the untamed wild west of the United States right to Europe. Finally, Discoveryland is the land of the future - filled with spaceships and interplanetary adventures. Of course, to get to any of these lands, you have to first walk through about 500 meters of the untamed commercialism of "Main Street, USA" - shops and restaurants decked out in turn of the century regalia offering you plenty of opportunities to spend money on just about any Disney-themed item you could imagine.

The neighboring Walt Disney Studios focuses on Disney movies and how they are made, including rides featuring Disney favorites such as "Cars" and "Crush" (the Australian turtle from "Finding Nemo" - far out, dude!)

Outside the gates of the two parks to the east lies the Disney Village - offering yet more stores, themed restaurants, shows and other entertainment. Finally, passing through the village, you'll find most of the Disney Hotels, clustered around an artificial lake.

We spent five days at the parks - hitting the last week of low season - from June 8th through 12th. In the five days, we were able to hit just about all the 5o-odd attractions in the parks, the main shows, and even a couple of the parades... with a 5 year old, 4 year old, and stroller in tow. Here are some general hints to help with your planning for a Disney vacation. They're things we found it useful to know, and figured might help you out if you're planning a visit. The next couple blogs will cover each of the lands in quite a bit more detail, trying to focus once again on the things that mattered for our tribe (and maybe yours?) Click here to continue reading the "Rubesh Family Tips for Disneyland Paris"

Tip #1: Book Disney
OK, OK - Disney didn't pay me to write this... really! Staying one of the seven Disney Hotels at the resort has definite advantages though. Until November this year, with Disney's the 15th Anniversary "Kids under 7 stay and play free" special, you really have to look hard to find a better deal. We paid about $280 / night, which included our cabin, breakfast each day, and most importantly, 5 days of entry passes to both parks for everyone. Buying tickets for our family of five (kids under 3 are free) at the gates each day alone would have cost us $250/day!

One other advantage of staying at a Disney (or partner) Hotel - you get to enter the park two hours early each day! Extra Magic Hours let guests of Disney enter the park early - for us it was 8:00 each morning, vs. the usual 10:00. Only a select few rides are open during these hours, but it sure helps to beat the mad opening rush each morning! Especially if your kids get you up early anyway!

Tip #2: Self-cater
Two things about food at Disneyland Paris resort. It's expensive. It's bad... (even in France - c'est dommage!) Expect to pay 20 Euros or more per person for dinner at the average hotel or park restaurant. 2 Euros for a small bottle of water. 2.50 for a small soft drink. You get the idea. We considered a couple of options before settling on Disney's Davy Crockett Ranch. You need your own transportation to get to and from the park, and it's no five-star resort. However, you get your our own little two-bedroom cabin, complete with its own kitchen and dining table. After the first dinner out at the Ranch restaurant, we were glad we had other options! If your kids have dietary restrictions, even more reason to be able to cook your own meals. There's a large Carrefour grocery store just a couple exits down the freeway, and the ranch's take-away breakfast bags (juice, milk, bagette, croissants, rolls, jams and Nutella) made a great ready-to pack picnic lunch for later in the day.

If you do book at Davy Crockett ranch, remember to bring: coffee and coffee filters (there's a coffee machine in the kitchen, but instant Nescafe coffee's all you get in your breakfast bag - or anywhere at the Disney Resort, for that matter); dishwasher detergent; a good cutting knife and charcoal briquettes if you plan to use the BBQ outside.

There are a couple other apartment and self-catering options listed under Disney's partner hotel packages - just check out their hotels page. If money's no object, try out the Disneyland Hotel - it's quite literally at the gate to the park - you pass under the hotel to enter! 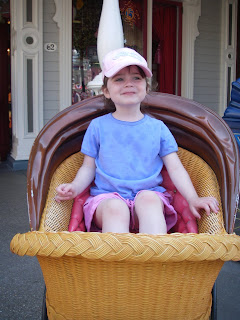 You've probably come a long way, and spend a lot of money for a Disney vacation. Why spend most of it waiting in line for the rides? Memorize the names of three features that will help you avoid the queues: FASTPASS, BabySwitch, and Extra Magic Hours.

FASTPASS basically lets you reserve a spot at the front of the line of most of the most popular attractions for a time window in the near future. Here's how it works - you feed your park pass into a machine near the entrance of the ride. It spits out a ticket with a 30 minute time window printed on it. Return during that time window and get in the special FASTPASS line that takes you almost directly to the front of the line of most attractions (be sure to grin devilishly at the poor schmucks who have been waiting in the sun for the past 45 minutes as you pass them.) How far in advance your time window will be depends on how busy the ride is. In most cases, we saw return times about one hour in the future. One catch - you can only have one FASTPASS issued at any time for each ticket. Once the time window on your current pass has started, you can get another one for a different ride - but not until then! 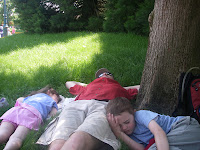 BabySwitch lets parents split up - one parent waits in line and goes on the ride. The next parent enters the ride through the exit door and gets on when the first one finishes the ride. Check with the Disney "Castmember" at the attraction's entrance for the details of where to wait - some will give you a BabySwitch ticket to pass to your partner when you're done. Split up the kids as you wish. This technique worked well for the rides that didn't have FASTPASSes available - one of us would wait in line with a good book while the other relaxed with the kids. A quick SMS when the waiter was about to start would alert the relaxer to head to the end of the line for their turn. If you're devious, BabySwitch and FASTPASS can be combined interesting and yet more timesaving ways. I won't spell out the details... but two teams of FASTPASSers, switching at the exits of different rides can be quite the timesaver if you time it right! 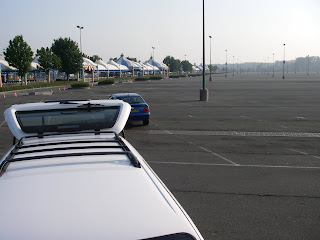 I touched on Extra Magic Hours in the previous tip. It's a pretty simple idea - stay in a Disney Hotel, enter the park two hours early. The catch is that not all the rides are open yet. The week we were there, only key rides in Fantasyland and Discoverland were open early. If nothing else, it lets you beat the 10:00 rush of "normal" park guests to be the first in line at attractions where there is no FASTPASS available. Oh yea - you also get to park right up at the front of a VERY big parking lot!

So - what do you do while you're not waiting in line? There's a long list of Disney attractions that don't require any waiting - but are just as fun - especially for the little ones. In the following sections, I've hilighted the "No Wait Attractions" of each section up front. Spend time at one of these while you're waiting for your FASTPASS timeslot or your babyswitch partner to stand in line for you. You can always take a nap too... find a shady tree, spread a blanket and let the tired little legs take a break!

Tip #4: Use the map
When you have kids with legs the length of our junior Rubeshes (short), you want to make every step count! Pick up several park maps as you enter both Disneyland Park and Walt Disney Studios - you'll go through more than one! Plot out your route for the day - and keep your eyes peeled for the "short cuts". For example, you can bypass the crowds of Main Street by zipping down the arcades tucked away on either side of the road. Take note too, of the parade route if you plan to watch it. We staked out a spot near the beginning of the parade, just behind the Fantasyland castle, then had the run of the lands at the back of the park while the rest of the throngs watched the parade progress down main street.

Next up? FantasyLand - click here for the scoop on Princes, Princesses, and even a dragon!