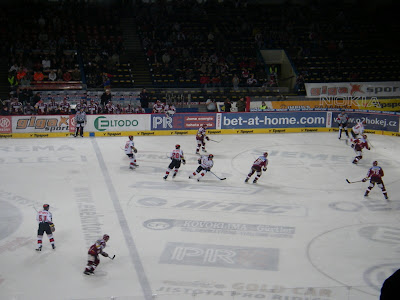 One of best places to learn "colorful" Czech language? Among thousands of hockey fans at the T-Mobile Arena during a HC Sparta hockey game! I learned, for example, that the word for "referee" in Czech is usually accompanied by an extended finger. Culturally appropriate? Maybe in the hockey arena. I don't think I'd try this particular translation of the word during polite conversation though!

HC Sparta is one of two major league hockey teams here in Prague, where hockey is a big thing. In fact, you're into hockey, take a look at your favorite team's roster. Chances are you'll see at least one Czech name. The game is big enough that Prague has its own hockey hooligans - though they were kept in Czech (ha ha) tonight by units of fully armored riot police, stationed at the four corners of the arena. One key difference from pro hockey in "the West?" The price! Entry for one adult was 150 Czk ($7) - kids under 145 cm get their own free seats.

Click here to continue reading "NHL - Czech Style"Of course for Jad and Danna, this first ever hockey game wasn't really about the speed on ice, the pace of the action or the close score (Sparta ended up winning in OT). It was about the "hot dogs". Dinner on the ice may not be classy, but it's filling and cheap - three foot-long Klobasas (sausages), served with a thick slab of bread and dollop of mustard; bag of chips and a 1/2 liter beer for about $10. Other highlights? The balloon that cruised around the arena during stops in the action, and the Sparta Cheerleaders. Though the kids thought their costumes were fancy, we decided together that yes, they really must be cold dressed like that on the ice!

We descended from the rafters to join a friend just off center ice for the second period. Good thing - we got to see first hand the effects of a hockey stick swung judiciously into a jaw. "Daddy he got an owie, huh?" Discussion moved from there to the reason for the "bad boy box" where the offending player had to spend his penalty.

By the start of the third period, Danna was just getting into the whole hockey fan thing "S-P-A-R-T-A!" "P-R-A-H-A!" (I think we may have a hockey hooligan in the making), but Jad was fading. Thanks to Prague's fabulous public transport though, we were back on the #12 Tram (the stop right outside the Arena is Výstavište) and heading home in no time flat.

Looking for an entertaining evening out that won't break the budget? Check out Czech Hockey!
Posted by Kevin at 3:05 PM