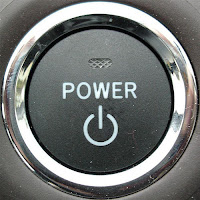 In the "What will they think of next" category, I drove an electric car last week. One that talked to me. Really! A quick business trip took me to Washington DC last week, where I rented a car to do some shopping. The clerk asked me if a Prius would work, I said sure, and went off to find the red car in parking space B14. It didn't click until I sat down behind the wheel that the Prius was Toyota's Hybrid car - a battery power, boosted by a regular gas engine when needed.

I reached for the key to turn the ignition and... well, it didn't turn. The "key" was a little plastic remote control thing that you shove in a slot in the dashboard... or keep in your pocket... or hang on your earlobe. As soon as the key's reasonably close to the car, you hit the big black POWER button and the car lights up like a Christmas tree in Old Town Square. Flip the "shift" lever into Drive - it feels a little like an Indy 500 arcade game as it pops back to the "home" position. The "D" symbol on the instrument panel lights up, projected onto the base of the windscreen in front of you. Then you hit the "gas" pedal - and you move... quietly, smoothly... no sound at all until the engine kicks on to charge the battery. Cool!

Actually, it was so cool that it was a bit distracting - listening as the engine came on, then off again then on. Watching the LCD display in the middle of the dashboard tell me how the car was currently being powered - gas engine, electric engine, both? In fact, I almost forgot to look outside the car and watch where I was going! Especially when Betsy started talking to me!

The rental included a talking GPS. Punch in a business name or street address, and in no time at all, "Betsy" was directing you right there... "In .4 miles, turn left on Wilson Boulevard". She kept me company while navigating DC's confusing streets... and became an invaluable tool during my hunt for Jad's "Mercury Zip Planet Hero" and Danna's "Blue Cindawella Pwincess Dwess." Mission accomplished... with a total outlay of $5 in gas!
Posted by Kevin at 10:34 PM