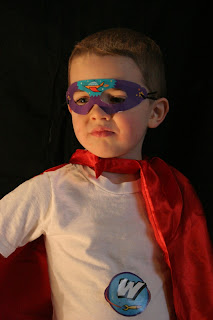 Super Powers: Super hop that is as loud as a warerabbit. The super hop makes him fly. His hearing is very good. He can hear far away - even he can hear Hawaii (from Prague). When he goes all around, he hears all of the United States of America and even the other places. He can even hear Asteroid Tiny or Photon or Neutron or Professor Darkness or even the Planet Heros or even astroids!

How he got his super powers: Well, when Wonder Super Snow Bunny was a baby, he lived on ColdAndDusty (a planet inside Star Wars), and then he went on a flying saucer and he landed on Earth. One part of ColdAndDusty was destroyed, but not the super hero that is from ColdAndDusty - that superhero, he is at earth.

Secret Identities: His disguise is he can disguise as a bush. And he goes into a forest and he gets disguised and he sits down and then when a bad guy passes him, he jump out and get him.