Date Night #12 - Sushi, with a side of Gershwin 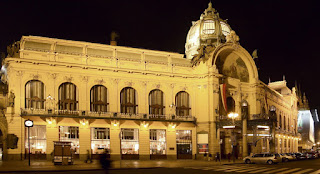 OK - here we are, living in a city full of culture and music. I'd say it's about time to get some culture and music - not to mention Sushi! Last night, we convinced our friends Roger and Janice to keep an eye on the kids for the evening, and headed out for a night on the town. Prague's Obecní dům, right in the center of town houses several concert halls - one of which was featuring "The Best of Gershwin." The brochure mentioned that all musicians were members of "famous Czech Symphony orchestras." Famous is good, right? We gulped a bit at the price - Czk 800 each ($47) but decided to splurge.

Tickets in hand, we headed across the street to the glistening Palladium Mall (home of our favorite Lebanese restaurant) to sample some Sushi at the "Running Sushi" restaurant. A fixed price gets you unlimited refills of Sushi, Tempura, Dim Sum and other Asian delicacies from two conveyor belts that run a never-ending supply of cold and hot food right past your table. "Quick honey - grab that shrimp!" There's nothing quite like a healthy dollop of wasabi to warm you up on a chilly winter evening in Prague! Being two Americans in Prague (rather than an American in Paris, for example), we washed down the raw fish and miso soup with 1/2 liters of good Czech Pivo.

On to the music - click here to read moreBut enough about food - time to Strike up the Band! The literature on the Municipal Hall claims it's one of the best examples of Art Nouveau. Not being an art major, I probably couldn't tell Art Nouveau from Baroque... except for noticing that the former is kind of more blocky and the latter is definitely a good bit more gilded. That's one reason I like to make sure there's always Someone to Watch Over Me in situations of high culture like this one... someone with a bit more education on the finer points of society (Erin).

Nouveau or not, the seating in the "Art Nouveau Hall" something short of 'S Wonderful. Sure - we saved 200 Czk by not purchasing "VIP Seats"... but for $45, I expected a little bit more than wooden chairs lined up in rows. Speaking of chairs, we couldn't help notice that there were only 5 on the stage. This wasn't going to be the grand symphonic introduction to the Arts in Prague I had envisioned. The musicians were good - don't get me wrong! The five piece string section and trumpet soloist hit every note... but left us hungry for more. Unlike the never ending sushi buffet, these guys were done almost before they began. "Rhapsody in Blue" completed in 5 minutes? With neither a Piano nor an Oboe? I got the feeling the musicians were missing the tourist throngs of Prague's Summertime:

"Uh - fellow members of the famous Czech Symphony Orchestra - what'cha doing this winter?"
"What you have in mind?"
"Ever played Gershwin? Heard he's good for a couple bucks."
"OK - I'll bring my trumpet if you bring the music and a violin!"

I may not be a professional musician, but I Got Rhythm, and I do know when we're hearing much abridged versions of Gershwin classics! Chalk this one down to the lesson books - next time we'll skip the box office and sneak in two minutes after showtime when the ticket takers head to the bar!