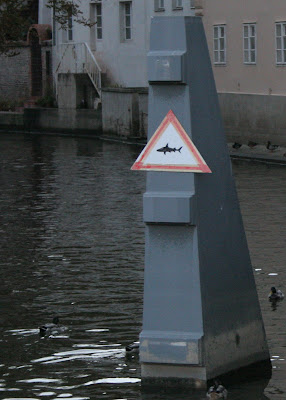 OK - this settles it. I guess I won't be swimming in these waters! We're guessing this must have been somebody's idea of a great practical joke... but they did have floods here not too many years ago. Who knows what might have washed in from the ocean?

We spotted this sign at the entrance to one of the canals leading out of the Vlatava river. The ducks don't seem to worried about the possibility of sharks, but wouldn't that make for an interesting story though? Killer sharks, roaming the canals of Prague?

Click the link below to see the picture in a little more context. 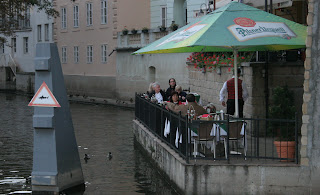 Doesn't look like the diners are too worried either. Maybe they throw their leftovers over the rail to the sharks!
Posted by Kevin at 11:18 PM