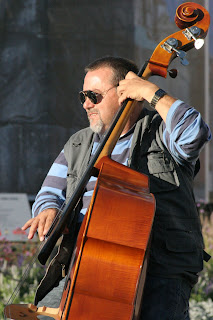 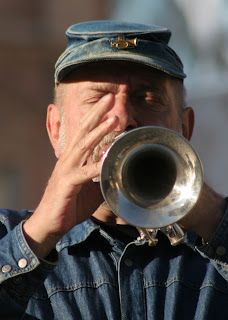 Erin's Mom was still in town, so we headed off a little early to catch the last rays of a beautiful Sunday afternoon. Wanna follow our walk? Download this Google Earth file, which includes the route, waypoints, and pictures along the way.

Our starting point tonight was the heart of Prague - Staré Město (Staray Myesto) or the Old Town. Prague is a city steeped in music, and Staroměsteké Náměstí (Old Town Square) is no exception! Tonight though. instead of a soaring opera Aria or the lofty notes of Vivaldi though, the square hopped to the brassy notes of the four-piece Staroměsteké Dixieland Jazz Band! Their leader, topped in a Civil War bugler's cap, took breaks from his trumpet to belt out completely incomprehensible "scat" through a tin megaphone. It sounded authentic, no matter what language it was in! 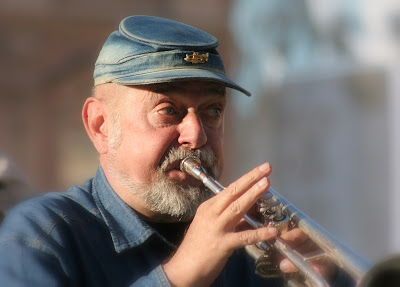 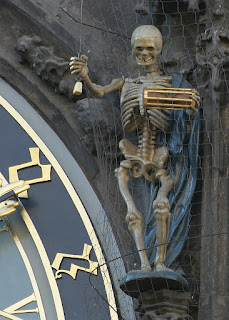 The real star of the the Old Town Square though, is the famous Astronomical Clock. The clock, hung on the side of the Old Town Hall, draws a huge crowd every hour when the figures of eleven Apostles plus St. Paul parade by windows set just above the face. Surrounding the clock are the figures of Death, a Turk, Vanity and Greed. When the parade is finished, a cock crows, and the clock strikes the hour... and the throng goes about their merry way, buying crystal, drinking beer and listening to Dixieland Jazz! 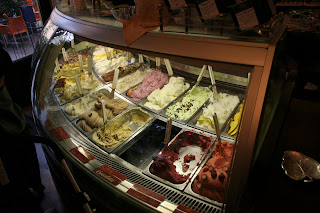 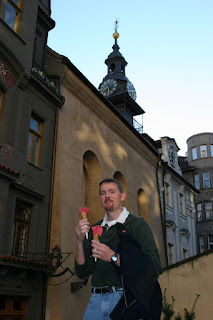 We left Old Town, and after a quick coffee recharge at the Domeček Café tucked away down an alley off Dlouhá street (good coffee - great 80's music!), wandered north towards the Josefov - the Jewish Quarter. This is the domain of the Golem - a mythical clay protector of the Jewish population of Josefov. As we walked the winding alleyways bordering the Old Jewish Cemetery, we didn't spot the lumbering clay beast. We did, however, sniff out a cafe on the glitzy Parižska street selling gelato - (Italian for "YUM"). Sweet teeth satiated for now, we carried on up Prague's most exclusive shopping street, passing the glistening windows of Prada, Cartier, Fabergé and Burbery. Our next destination was Letná Park, sitting on a plateau above the river, just across the Čechuv Bridge. 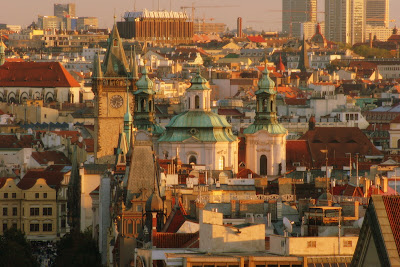 The view from the granite pedestal overlooking the city is spectacular (see the panorama at the beginning of this post) - especially around sunset when the city takes on a golden glow. A statue of Stalin used to stand on this spot - it's now occupied by a huge metronome - which is reputedly not a whole lot more popular! The Vlatava river curves below us, dotted with barges and dinner cruise ships. Far off in the distance to our left, the Žižkov Television Tower rises like a spaceport, hundreds of meters above the town, its modernistic architecture a stark contrast to the ancient church spires dotting the city below it. Some people say the best view of Prague can be seen from the observation deck of the tower... precisely because you can't see the tower from there! To our right, the symmetrical arches of the Charles Bridge make their way across the river.

Having soaked enough of the view to last us the rest of the evening, we made our way back down to the river, and headed toward the familiar Mala Strana (lesser quarter) for dinner. These early fall evenings are ideal for sightseeing - and several tourists were doing just that - dangling from a hot air balloon!

Trying a "short cut", to Charles Bridge, we were cut off by a canal advertising some rather sharp-toothed inhabitants. We decided to play it safe and retrace our steps via land. Prague is a city that hold surprises around just about every corner. Tonight - we found what was probably the most... um... anatomically correct? fountain I've ever seen. Erin took a liking to one of the guys... good thing he was metal and rather rooted to the spot!

We finished up the evening with a traditional Czech dinner at the Baráčnická Rychta - a pub tucked away in a tiny alleyway just around the corner from the Embassy. Decoding the menu was a challenge - even with the English menu. We passed up such tantalizing options as "Leg of Fallow Deer on a Skewer", "Roasted Pork Neck in Three Colored Pepper", and even an entire section labeled "Seasoning Additives for Beer". I settled for the "Pork Knuckle" - a leg of pork, baked on the bone, surrounded with crisp pork crackling. It was delicious! So delicious that I could feel my cholesterol rising with each bite! Erin chose the much healther chicken schnitzel, deep fried in a golden batter, and we finished up apple pie a la mode and a plate of "Flipper to Blueberry" (a plate of blueberry-covered scones smothered in whipped cream). Total damage, including drinks? About $25. Eating out around here on a regular basis could definitely turn into a very unhealthy habit!
Posted by Kevin at 9:24 PM