One nice thing about this job? The free housing! Before we even arrive in a new country, a board meets, deliberates, and assigns us a house. Zimbabwe, Oman, Czech Republic or Costa Rica, we're assured of getting something livable to house us for the three years of the assignment. We're also assured that our house will be issued to us with government-standard white walls. Nine years and four houses after we started this Foreign Service life, we've always lived between white walls, and until now, we just haven't had the time, energy or experience to do anything about it. Perhaps being pregnant or arriving with a newborn in hand at each of our previous three posts had something to do with it? 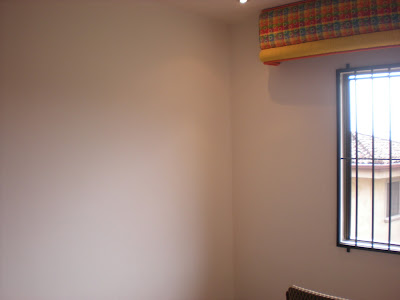 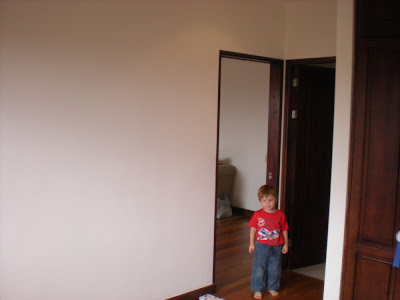 Kyler surveys yet another white-walled bedroom

Our arrival in San Jose was different - for the first time, we had three walking kids... two of whom started school the week after we got here. Time to bring some color into our lives for a change!

Last week, Erin and her capable assistant (Kyler) made a trek down to San Jose's equivalent of Home Depot. Still without wheels, they summoned our new best friends - Taxis Escazu. Once the red taxi appears, the next trick is to use our two-week old Spanish to get the taxi where we want it to go. This conversation was about par for the course:

Erin, at this point, writes down the name of the store... "EPA" on a piece of paper and shows it to the driver.

At least they know how to find their way to our house now, which is more than I can say for Ambulance drivers around here - but that's another story. Anyway - EPA found an English speaking employee to help Erin out, and she came home equipped with paint and the tools of the trade.

After a quick breakfast, we shooed the kids out of the way and started work. 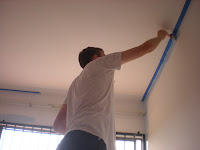 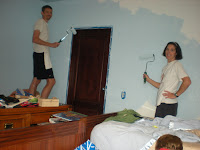 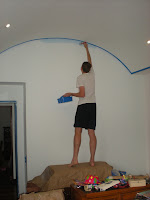 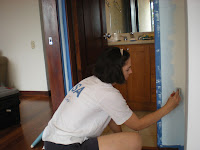 Good thing I'm tall - these ceilings are up there - even standing on top of furniture! Photos courtesy of Danna.
For newbies at this painting stuff, we didn't do to badly. Managed to keep the paint off the hardwood floors (mostly), the furniture (well, except for that one little spot), the kids (at least one of the three), and ourselves (eh... not really). 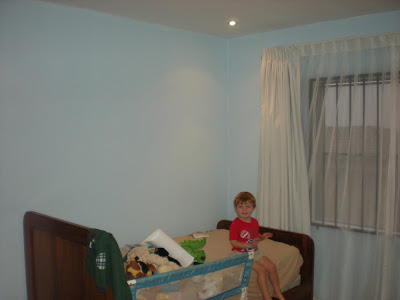 Walls dry, curtains back up and bed back in the room - all in one day!
By just after lunchtime, we had two of the three kids rooms done. Kyler and I put the finishing touches up in his "new" room by putting up his car, plane and train decals. 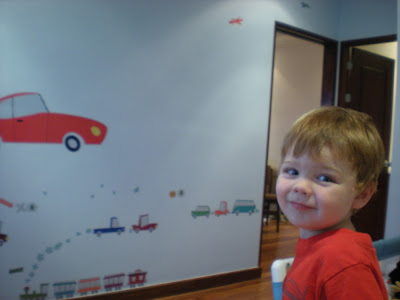 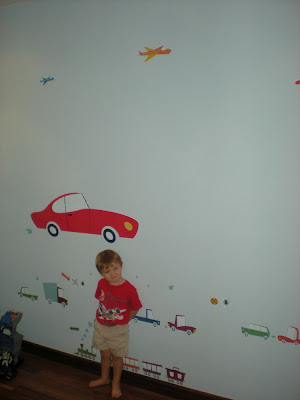 Yes - the paint was actually dry before he leaned on the wall!
Of course, the new base color is just the beginning. Both Jad and Danna would like their rooms to sink into the undersea universe of their imagination. Jad wants a shark staring at him every night. Kyler has asked for "Maskween" (Lightning McQueen from "Cars"). Not sure what's going to eventually appear on Danna's walls - unfortunately, our favorite mural artiste is still in Prague, so Ariel may not make a repeat appearance.

But... despite the fact that there's still paint under my fingernails, this stuff is kind of FUN! And really not a bad way to spend a rainy Saturday without wheels in Costa Rica. Who knows - in a couple weekends, we may not have any white walls left in this place!