Volcano, with a side of cow tongue, please

OK - so you don't usually run into volcanoes and cow tongues on the same weekend, but there we were, in a hole-in-the-wall hotel/restaurant in the mountain town of Ciudad Quedasa and it just... happened.

It was pouring down rain, we had hours left to drive to get back to San Jose, and the guidebook recommended the Hotel Don Goyo's steak (it also said the hotel would make a great Quentin Tarantino movie setting, so we really couldn't go wrong.) We started leafing through the menu (only available in Spanish), and settled on steak looking items and a plate called "Lengua con salsa de carne." Using our excellent Spanish, we quickly deduced that "lengua" was something similar to "linguini" and that a plate of "Spaghetti with meat sauce" would soon appear.

What appeared was clearly not spaghetti, but we weren't sure what is was. Danna started digging into it with a gusto - "I've never tasted such yummy meat!" she commented between mouthfuls. And then it clicked - a memory from our honeymoon in a small town in Mexico (our only prior experience in a Spanish-speaking country), where Erin and I found our way to a local church for the Sunday morning service. 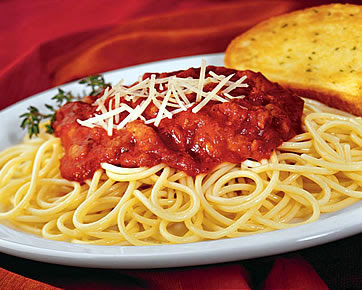 Once we figured out the passage for the day (James 3), we were able to piece together the gist of the sermon - "La importancia de una lengua hermosa" - or importance of a beautiful tongue. Kind of like the tongue Danna was chowing down on.

The meal was delicious - the best steak we've had... well almost ever. The meat was fresh from the surrounding high pastureland - and in fact, it may well have wandered right off those pastures directly into the kitchen. And, in case you're wondering, no snappily dressed hitmen visited us during the meal. Delicious tongues on a Tarantino movie set. And that's just at the lunch stop on the way back from the volcano! 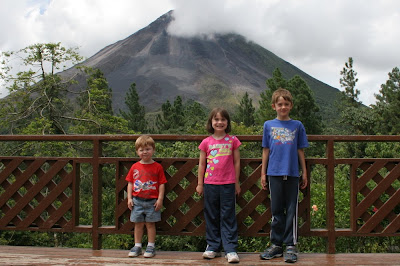 Tasty tongues aside, a volcano was the real destination for our first trip out of San Jose - an active volcano. In fact, Volcan Arenál is listed as one of the ten most active volcanoes in the world - it's been continuously erupting since 1968! About 3 1/2 hours out of San Jose, the Arenal Observatory Lodge is the place to see it from. Situated on a ridge less than 3 kilometers from Arenal, you really can't get much closer without burning your feet. Getting here involves a 10 Km drive over "native road" - (rough, washed out gravel) after exiting the main road just Northwest of the town of La Fortuna.

The lodge started its life as an observation station for vulcanologists from the Smithsonian Institute, and still retains a bit of the original expeditionary feel. It's no luxury resort - but the rooms are comfortable and clean, the shower's hot and you really don't come all the way out here to watch TV or surf the internet anyway. You come all the way out here to sit on your balcony and watch the volcano slip in and out of the clouds.

The restaurant serves up delicious (though a bit pricey for a rustic lodge - $50 for lunch for our family of five) meals as well as a commanding view of both the Volcano and the Arenal Lake at its base. The breakfast buffet, included in the price of the room, is almost worth the price of admission in itself. There's even a buffet set up outside for the tropical birds.

The kids kept themselves entertained while waiting for food by taking up chess on both of the oversized boards. Kyler soon picked up the essence of the game - you use one chess piece to violently knock over another piece, until all the pieces are on their sides. Bobby Fischer he is not (yet).

What's really neat about this place is that you're really out in the middle of the woods. The woods in this case being real, live rain forest! Every morning, a guide from the lodge leads visitors on a free three hour hike; first over the property's hanging bridge and via paved trails, past trees, bushes and shrubs that are labeled for your Botanic edification. Did you know, for example, that the one of the primary ingredients of Chanel N°5 perfume is the leaf of an extremely fragrant tree that is pollinated by bats? I wouldn't have believed it until I sniffed a crushed handful of leaves.

The trek then heads off the beaten trail to a waterfall surrounded by green. A great place to break in new rain boots, throw rocks into the rapids and pretend you're Indiana Jones searching for the long lost somethingorother.

For those without kids... miles more of interesting hikes await - to lava flows, flooded craters and more.

Of course, being in the rain forest, critters abound as well. The purple flowery bushes buzz with hummingbirds, furry racoon-like critters roam the grounds looking for a handout, white-faced monkeys glare at you from the treetops, and if you pause to look carefully at the plants lining the trail, you find an incredible variety of tiny critters roaming about (pardon the scientific terminology in the above paragraph).

All good volcano trips do have to come to an end, and soon we were back on the road to San Jose - winding up and up the narrow mountain roads, in the rain (they don't call it "rain forest" for nothing!), and eating delicious cow tongue along the way.

I get a feeling this (and not the litter-strewn, potholed streets of San Jose) is why people come to Costa Rica. 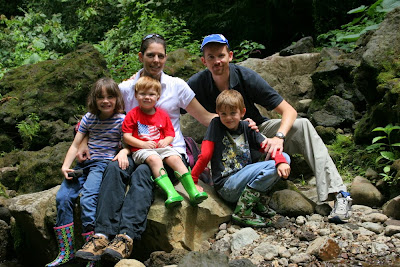 I love Arenal!! Great photos - so glad you had fun!

Oh, but there is something wonderful about the litter-strewn, potholed streets of San Jose that I loved. Call me crazy but our time in San Jose always added to our visits of Costa Rica.

As always, I love your post! I have "never" laughed so heartily at the lunch choice. One good thing about not knowing the language is that you can be adventurous and try quite a lot of foods without really knowing what you are eating until you have had a delicious experience. Personally, I will take Danna's word on how good it was. Knowing what it is, I don't think I could try it. Great pictures, it definitely makes me want to get there soon!

Love, love your posts! All our love to the family!!