Splash down in Costa Rica

San Jose, Costa Rica gets an average of 10 inches of rain in August. Most of that 10 inches seems to have fallen in our first 7 days here in San Jose. It's not the constant gloomy drizzle of say - the Pacific Northwest in the winter. Rather, the average day starts out gorgeous - puffy white clouds against a blue sky. Around noon, the dark grey clouds move in to replace the white ones, and with a clap or two of thunder, the heavens open up. The clouds move down from the mountain tops surrounding the city. A single watery splat on a leaf is joined by a ping on the tin roof next door, which is accompanied by a cascade of slaps on the leaves of the palm tree... and then BOOM. The heavens open up, and the air turns to water with a liquid roar.

Rain on our driveway
We got the full taste of a San Jose rainstorm firsthand on day two here in Costa Rica. We had noticed a frozen yogurt store "just down the hill" from our house, and decided to take an afternoon walk to get some dessert. As we left the house, the clouds were beginning to gather - and about half way down the hill, down came the rain. The kids were suited up in their rain gear, "just in case", but Erin and I quickly found that our Old Navy anoraks were just not up to keeping out a real rainstorm. After a drippy snack, we headed back up the hill to the house in the middle of a thunderstorm. Kyler, buckled in his stroller, promptly fell fast asleep. Soaked the bone, we made it back home 15 minutes later - having survived our first family walk in the rain. 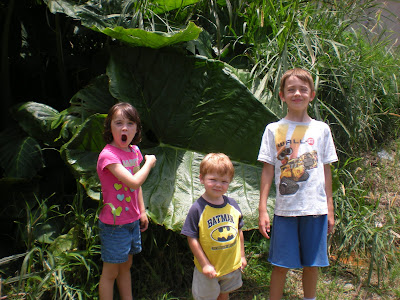 Stuck in the rain without an umbrella? No worries - just pick a REALLY BIG LEAF!

Costa Rica is an interesting study in contrasts. It's a country fighting for "developed" status, but not quite there yet. In our neighborhood, high walls surround palatial villas and condominium complexes (AKA town houses on a compound). But the houses are wired for electricity via a bare wire twisting down between the tree branches from the overhead lines to a junction box outside the gate. Tap water is clean and safe to drink in San Jose. But the gutters on the sides of the potholed streets look (and smell) quite a bit like open sewers. 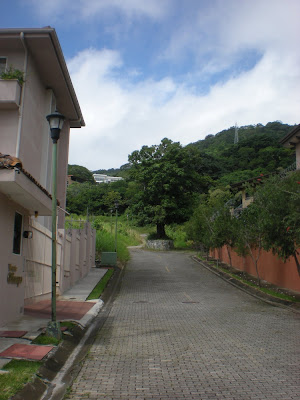 Our neighborhood in the Escazu hills above San Jose.
Taxis are clean and safe, and are driven by smart, tie-wearing drivers. But the "addresses" those taxis are dispatched to start with a well known (you hope) landmark, and proceed with directions such as "100 meters south, 125 meters southwest..." The distances - and even compass bearings seem to bear little resemblance to geographic reality, so most rides involve the taxi driver waving down a passerby to ask for directions. Add our mangled "Spanglish" to the mix, and it's a wonder we're able to direct a taxi to our place at all! 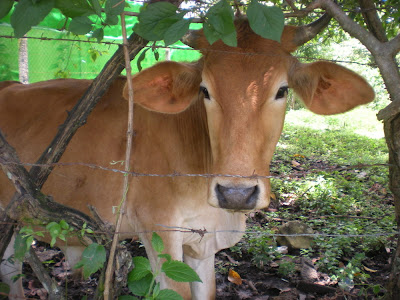 One of our neighbors.

TV and Internet in San Jose is provided via cable, but the installers insisted that the only place they could install our internet was in our laundry room. This is the same laundry room that came complete with plugged drains and pipes that can't keep up with our washing machine's output. Worried about a flood outside during a torrential downpour? Well, we have a flood inside as well - but thankfully only during the rinse and spin cycles! 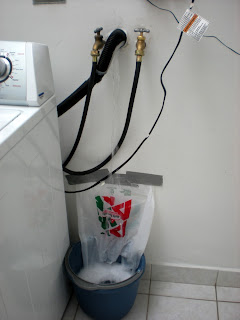 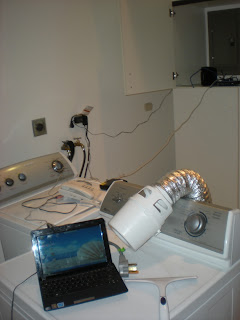 Yet another reason to always pack duct tape, and our "home office"
It's always tricky to land firmly on your feet in a new place - and our arrival to San Jose has been no different. This first week, we've felt like we've been caught in a rainstorm - and not just the one outside on the way to the frozen yogurt store.

Trying to describe to a taxi driver in Spanish on a cellphone how to find your house... SPLAT!

Meeting a whole new Embassy worth of people, projects, issues and personalities... PLOP!

Fighting leaking washing machines while keeping three kids occupied and off each others nerves... DRIBBLE!

Trying to figure why the cable guys are looking for the "cable largo y negro" poking out of a wall and why they have to install the internet in the laundry room instead of at any of the other perfectly good cable jacks in the house... PITTER PATTER DRIP DROP.

But the nice thing about the rain in San Jose? It never lasts for long. The clouds move on, the sky clears up, and a light breeze circulates the cool, slightly damp air through the house. It's crisp, clean and refreshing. And tonight, as I look down on the lights of San Jose glittering like a thousand diamonds in the valley below us, I realize something. That this type of "everything is frustrating and a little bit overwhelming" thunderstorm is normal for a splashdown in a brand new place. And just like the rain, it too will pass eventually. With every new word of Spanish, each new discovery, each new friend and contact, this place, like any place we bring our little tribe to, will feel more and more like home.

I do need to get a new raincoat through!
Posted by Kevin at 3:51 AM

The laundry room?! That's ridiculous. I can't wait to hear how you guys set up an office.

Yep! Fortunately, I rewired the internet this weekend to get it somewhere more central, and the plumber dug the roots out of the drain pipe. No more washing the floor every time we wash the clothes!

Hey, we're good at transitions...it takes time, but eventually, as a rule, we get happy and comfortable. Such is the way with the common rubesh. Praying for you guys as you settle in and love you all! Transition time again for us as we head back in a week!

Yay! I'm so happy to hear that.