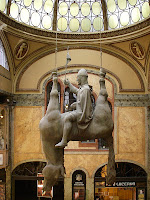 You don't often come across a statue of a saint sitting on the belly of a decidedly dead horse. Believe it or not, that's exactly what hangs from the ceiling in the lobby of the Lucerna Palace Cinema, just off Wenceslas Square. Having opened in 1909, the cinema boasts being the oldest operating cinema in Europe. The single screen theater, seating 500, is truly stunning. Until the velvet curtain opened and the Dolby Digital Surround Sound kicked in, you could almost believe that you'd been magically transported back in time to 1929, when "Show Boat", the first "talkie" movie premiered here. We made ourselves comfy, settled down and spent a couple hours learning about the life of Jane Austen in "Becoming Jane".

I thought the movie flowed a little like a Jane Austin novel... introduce a slew of characters speaking thickly-accented English (no - the Czech subtitles did not help) through a very slow opening 30 minutes or so, and then spend the rest of the movie figuring out who was who and what they were up to. Not a bad way to spend a date night though - and this was the first movie we've gone out to see since this summer in Oklahoma City. Tickets were 120 CZK / US$7, but there was no popcorn... so we had to settle for sneaking in a Bratwurst from the corner hot dog stand!

We rounded the night off with a visit to TGI Friday's for a good, American style hamburger. Delicious, messy, and well worth the trip! We'll have to remember to bring our own drinks in next time though - the 1/4 liter bottles of water just didn't do justice to the thirst worked up by a sausage and a Jane Austen movie. Free refills? Forget it!
Posted by Kevin at 10:18 PM