The Boxes Are Here! 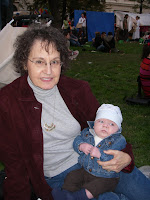 So on Friday came the day that any family in the Foreign Service both loves and hates... the day the boxes show up! Up till now, we'd been settling in to our house in Prague with nothing more than the contents of our suitcases and a small air shipment. On Friday, everything we had packed up in Muscat over four months ago showed up at our doorstop. Seven crates containing 232 boxes. Boxes containing clothes, toys, pots, pans, nic nacks, books, bikes, junk, paper, computers... perhaps even the occasional bug from Muscat... you get the picture. No easy task, even if you don't have three munchkins "helping" you at every turn. Fortunately, the reinforcements had arrived the day before. Erin's mom "AJ", professionally qualified to entertain grandkids, hold and change a baby, swooped in just in the nick of time! 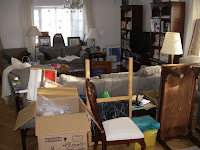 So, we began the unenviable task of cluttering our house. Some of the first boxes to be opened had Jad and Danna's toys inside, and a "toy eruption" quickly ensued. Toys they had not seen for months, toys they had forgotten about, and toys we had forgotten about, all spewed out of the brown cardboard boxes. The tricky part is finding a place in the house for everything. Especially in a house which is a tad bit smaller than the one we packed out of in Muscat.
We also discovered portions of our wardrobe we had not seen for years! The last time we lived in a cold climate? The winter of 2001 in Portland - the year after we were married! Since then, sweaters, jackets, raincoats, socks and hats have been waiting patiently in

boxes - following us around the world. Well, this weekend, most of them they finally found their places up front and in the center of our closets! The rest got a rather unceremoneous dumping in the "to give away" box at the bottom of the staircase. We've been amazed at what kinds of things we've actually held onto all these years, and have entered a mini "purge" phase in our moving careers!
Three days into the process, we can now see most floors, there is walking space in the garage, and our kitchen shelves are once again stocked with spices from the far east! And Kyler? Well, he's not quite sure what to make of it all (but he's sure glad is "Tayta" is here to hold him!)
Posted by Kevin at 10:01 PM