We sang Christmas carols in the minivan as we drove to Bethlehem the other night.  And it struck me how different the Bethlehem of today is from the one I’ve always envisioned during the Christmas season.  Maybe you dream of the same place every year?  You know, the little town lying still beneath the darkened sky.  The comfy stable back behind a busy inn, filled with sweet smelling hay.  A mysterious star guiding strangers from afar, and strange happenings among the shepherds in the fields just down the hill.

Our minivan slips right through the 8-meter tall “security wall”, past armed soldiers and border checkpoints.  Without the benefit of diplomatic license plates on their donkey, though, Joseph and Mary would have found it quite a bit harder to enter Bethlehem today.  A complicated discussion about ID cards, “Area A” and citizenship would have certainly delayed their arrival at one of the few hotels in town.

We pass under the observation towers and inch our way up what used to be the main road connecting Jerusalem and Bethlehem.  Reduced to about a lane-and-a-half by concrete detours of the wall and security checkpoints, it’s just about wide enough to let us squeak by a line of tour buses returning to Jerusalem.   When impatient taxis try to jump the queue by driving up our side of the road, we seek refuge on the sidewalk.

Driving through the center of town, past “Nativity Square”, Bethlehem is decked with lights and decorations.   Santa and his reindeer compete with the baby Jesus and his family.  Vendors hawking “genuine Bethlehem handicrafts,” vie with restaurants and stores lining the narrow streets.  Christmas carols blare on tinny loudspeakers, and crowds of pilgrims and tourists jostle for entrance to the church where the original stable may well have stood. I suppose the chaotic, crowded Bethlehem of today is similar in many ways to the chaos that descended on Bethlehem 2000 years ago, when all in “the line of David” returned to their ancestral home to respond to Caesar's census decree.  Swap out Palestinian Authority policemen for Roman legionnaires, honking taxis for braying donkeys and crowds of tourists for throngs of census takers and you’ll probably get a good idea of what the “little town” of the carols really felt like that busy season

We ate dinner overlooking a field where shepherds once watched their flocks by night.  On the hilltop in the distance, the lights of Bethlehem twinkle, but here in the field, all is quiet. The stars shine bright in the dark sky above, and I can well imagine why the shepherds were terrified to see a “company of the heavenly host” appear out of the darkness.  As we walk the same dusty paths trod on by the wisemen, shepherds and Holy Family of the Nativity, amid the turmoil that is the Middle East, I can’t help but wonder that the “Prince of Peace” was actually born here. In Bethlehem.

In a town caught in conflict between the two sons of Abraham.  A town divided not only by concrete barricades, but also by barriers of violence, mistrust, and hardened hearts.  A small town in a small region of the world that seems so far from being peaceful today.  As we celebrate the coming of the Prince of Peace 2000 years ago, may the peace He promises be our guiding light!


How still we see thee lie


Above thy deep and dreamless sleep


The silent stars go by


Yet in thy dark streets shineth


The hopes and fears of all the years


Are met in thee tonight

Merry Christmas from the Rubesh Family
Celebrating the good tidings... in the land where it all began! 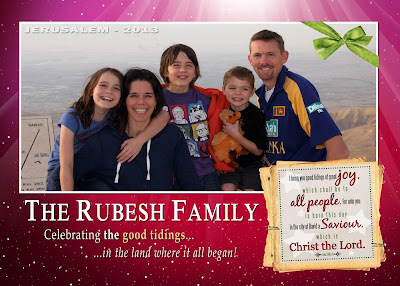