A little slice of Holland

With "Tayta and Jiddo" (Erin's parents) in Prague for a visit, we drove to Holland this weekend. OK - not really to Holland, but it kind of felt like it! The Eastern end of Lipno Lake, along the Czech-Austrian border was "discovered" by Dutch developers several years ago, and a bustling little resort town - including a marina, a golf course and a ski area - has sprung up out of nowhere. Today, just about all the signs appear in three languages - Dutch, German and Czech, and every other license plate is from Holland.

We were looking for a family friendly hotel within easy striking distance of Český Krumlov, and stumbled across the Lipno Lake Resort via the Internet. A couple emails later, the van was packed, kids' bikes loaded on the back, and we were on our way. Minus potty stops and a lunch break, we rolled into the the resort reception in Lipno nad Vlatavou just about three and a half hours after we left Prague. A signpost pointed out the number of kilometers to Prague... and to Amsterdam!

The resort was all the website (in Dutch, German, Czech, and poorly translated English) billed it to be. We picked up our keys from the friendly Dutch park managers, plunked down a wad of Czech cash, and found our home for the weekend - and it was nice.

Our "LLR8S" apartment featured three bedrooms spread over two floors, a spacious dining room, kitchen and living room, balconies overlooking the lake, and a sauna! Cool! The kids wasted no time staking out their beds and testing the sauna. 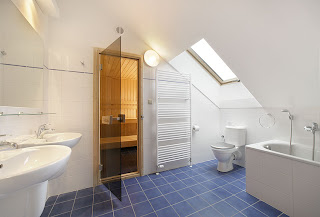 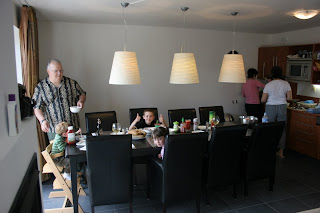 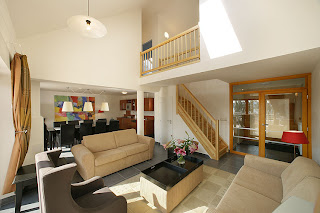 We've tried out quite a few apartment-type hotels around Germany and the Czech Republic in the last few years, and this one was by far the nicest. The pool ("heated"), playground and trampoline right outside the apartment didn't hurt! What makes this place really nice though is the location - wedged between Lipno Lake on one side and a ski resort on the other. In the summer, mountain bikes take the place of skiis on the lift, a ropes course is in full swing, people are zipping down the bobsled run, and the evenings echo to the sound of live music. 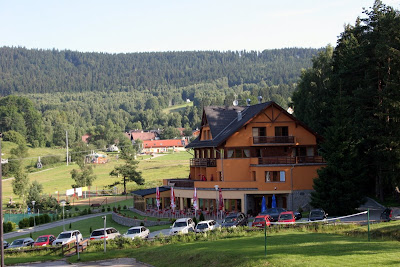 Lipno Lake is a great place to bring your bikes - even if you're not planning on riding down the ski slope, bike and inline skating trails run along the lake, and crisscross throughout the forested hills. Don't have room to pack them? Pick up a rental by the hour, day or week at any one of a number of rental spots - including one featuring the latest downhill bikes at the foot of the ski slope!

Lipno Lake Resort's "sister property" the Lipno Lake Marina across the road features the "Aquaworld" mini indoor water park. If you're staying at the resort, keep your receipt and present it at reception for a full refund. The lake was still a bit cold this July weekend... but the strip of sand just beside the Marina made for Kyler's first beach experience and was fun anyway (Kyler doesn't look convinced in this picture!) 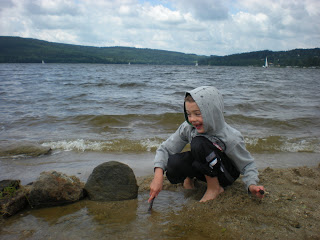 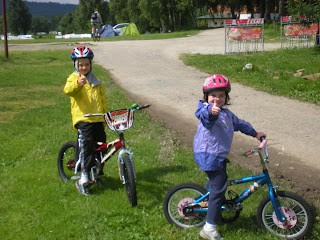 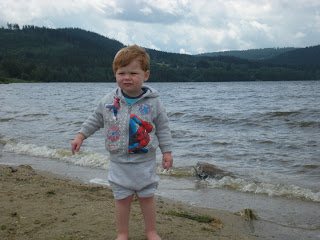 Lipno a great home base to use for all variety of day trips - including our trip to Český Krumlov - one of the Czech Republic's most beautiful "Castle Towns". A day's just about enough time to tour this town - and explore the country's second-largest castle complex (after Prague Castle).

Our only regret? At just three days, this stay in beautiful Southern Bohemia was just a bit too short!
Posted by Kevin at 8:59 PM

Hi Kevin, I'm glad you enjoyed your stay at our Lipno lake Resort.
I hope to get the Englisch version of our website improved soon..