OK - so there Erin and I were - surrounded by the fine culture, class and cuisine of Vienna. Erin's mom (still my favorite mother-in-law) bravely volunteered to corral the kids for a weekend, and we had jumped on just about the first train out of town. So... like I said, there we were, standing in the U-Bahn station, heading to our hotel, when I saw it. Beckoning at me from the other side of the tracks. My camera was, of course, stuck in the very bottom of my bag. "Erin!" I yelled. "Get your camera - QUICK! Take a picture of THAT SIGN!" Being a mom who rarely has more than one hand free at a time, Erin's camera is small, svelte, easy to pocket and unpocket... and burgundy to boot. She sprung into action and grabbed this shot: 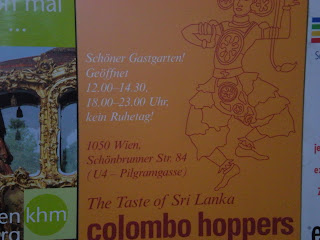 Now to someone who hasn't grown up in Sri Lanka - the sign on the left may not mean a whole lot. An ethnically dressed character posing next to a sign for... grasshoppers? Not quite, my friend! Ask any Rubesh (of the Don Rubesh lineage) about hoppers, and you'll get the salivation of a Pavlovian dog at a handbell choir recital. Hoppers are like... Guiness to an Irishman... Steak to a Texan... fine wine to a Parisian... Schnitzel to a Viennese.

Picture (and address) firmly on memory card, our first stop in Vienna, after checking into our hotel just outside the Schönbrunn Palace was Colombo Hoppers. Eager to dust off my rusty Sinhala, I eschewed the German menu and ordered off the cuff in the majority language of Sri Lanka to our waiter - who clearly had no idea what in the world I was saying.

Fortunately, our host and the owner of Colombo Hoppers seemed happy enough to trade German for my oddly accented Sinhala, and we soon settled on a good variety of string hoppers, curries and fruity drinks, all the while serenaded by Sri Lankan baila on the stereo and the whine of mosquitoes (imported from the Replendant Isle, I'm sure) 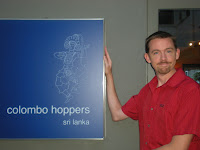 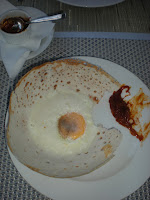 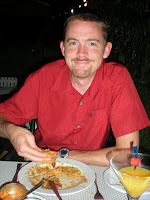 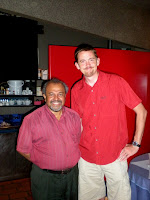 Looking for Viennese Cuisine with a kick? Look no farther than Colombo Hoppers - as the sign in the metro says, its just down the road from the Pilgamgrasse U-Bahn station on the U4 line.

Not to be outdone, the very next day, we hopped off a perfectly good (and dry) streetcar and into the pouring rain when Erin spotted her equivilant of Sri Lankan cuisine - Restaurant Beirut. We were the first ones in the door for lunch, and the tabbouleh was fresh off the cutting block and delicious. Our waiter/chef did not look very Lebanese, and we soon discovered that yes, we were actually speaking in Arabic to an Indian who cooked Lebanese food in Austria, and whose first language was English. Go figure! 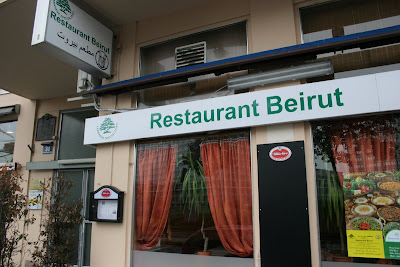 One thing to keep in mind while dining in Vienna - don't forget a well-stocked wallet. Classy eats like these don't come cheap... and apparently, between cutting up parsley and frying falafal, they haven't had time to fix the credit card machine at Restaurant Beirut.
If you're looking for a quick warm up after all this traipsing around town to find decent eats, look no farther than one of Vienna's famous cafes. One like Daniel Moser, on Rotenturmstraße, for example. It has the best coffee in town (really, their awning says so)... and, they've been serving it since 1685 (really, their saucers say so). Actually - it was good coffee... very good coffee!

We did actually find traditional Viennese cuisine on our last night in town - it must have been authentic - we could actually hear the chef pounding the schnitzel through the kitchen door. 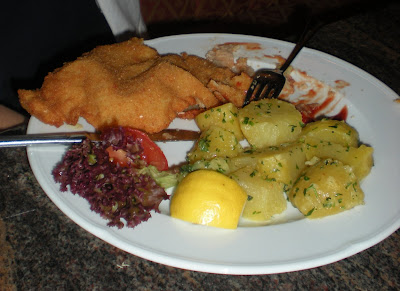 Between all this fine eating and drinking, we did actually get to see some of Vienna. Here I thought that Prague had some impressive Palaces and gardens. After wandering through the Hapsburg's summer retreat at Schönbrunn Palace, and the other palaces, large and larger that litter the city, Prague's best all seem rather... quaint and provincial... . 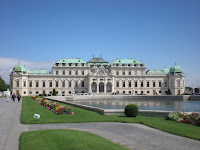 The best way to get around town? The U-Bahn's not bad, but you really can't see much. A much more "in touch" way to tour the city is from the seat of a Vienna Citybike. Here's the idea - walk up to a kiosk, insert your credit card as a deposit, and unlock a bike that's FREE to ride for an hour. Lock it up at another one of the 60 or more stations scattered around the city, and then return to check it out for another free hour of riding. Exceed your free hour? You'll be charged all of one Euro for the next hour. The bikes even work in the rain (we tested them to make sure!) 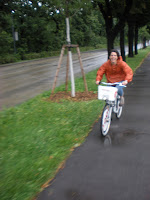 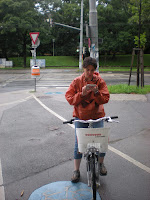 Bike are fine for getting around Vienna - but for the trip back to Prague, Czech Railway's Pendalino high-speed trains are the ticket! Smooth, quiet, fast and fully air conditioned, these things are like flying - but at ground level. Four hours after pulling out of Vienna's Sudbahnhof, we were back at the decrepit, filthy Hlavni Nadrazi main train station in Prague (don't worry, they're renovating it).

Buy your tickets online and speed off to Vienna - for a weekend of excellent cuisine, multilingual conversations, impressive palaces and free biking!
Posted by Kevin at 11:07 PM