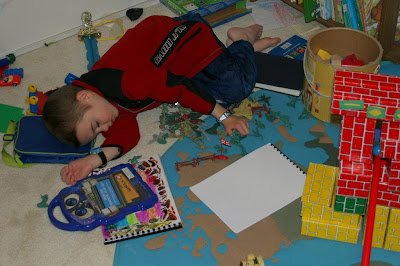 The family landed back in Prague today after a long trip from Oklahoma (OK, sure... all flights with three kids and only one mom officially qualify as "long" - this one was no exception!) As usual, Jad and Danna were star travelers, and used their "Native American eyes" to help out mom this trip (the kids are about 1/16th Native American - so we've told them that they each have one eye and one ear from that side of the family.) Danna found a loose passport under their seat in the plane (whew!) Jad spotted one of his cowboy boots on the tarmac (I guess it slipped out of the bag after an over-zealous TSA search). The boot made the rest of the trip in Erin's carry on (sure, there was plenty of extra room!) The passport successfully got Danna back into the Czech Republic.

On landing in Prague, Erin got a rude reminder of how customer-friendly folks in this part of the world are. One mom, three kids, eight pieces of luggage, two luggage carts and a stroller. Pleas for assistance fell of deaf ears, and though Jad is big enough to push a cart, he's not big enough to see over the stack of luggage to steer it! Needless to say, they were glad to let me take over!

As if traveling along across the Atlantic with three kids wasn't hard enough, Erin caught a stomach bug somewhere just before take off. Emergency trips to the lav at 30,000 feet are even more fun when there's a sleeping toddler on your lap! Danna picked up the same bug and hasn't even been able to keep down ice cubes this afternoon.

Jad? He's the only one that actually slept much of the flight - and he has played hard, re-discovering all his toys, until he quite literally passed out on the floor in mid-play! Our newly adopted cat is not quite sure what to make of all this action, but I'm sure she'll adjust to the extra attention!

We're back! Hit the play button - life in Prague goes back to full speed starting tomorrow!
Posted by Kevin at 8:53 PM

YEAH!! WHAT a trip! So glad you guys are reunited and Danna's treatment went so well! Now, just to get rid of that bug! And, post some pics of the new kitty!! I saw Kevin's note about things being covered in cat hair the other day and hoped Jag and Shadow hadn't found something hidden and left their mark! lol