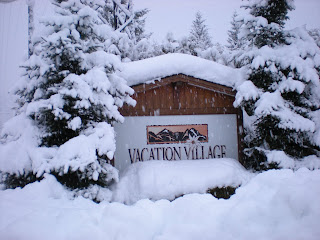 ...that is the question. Unfortunately, the answer turned out to be "not to ski". Yes, this 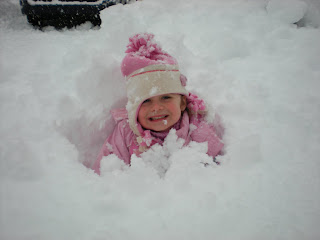 was our 2nd year in a row to attempt a European ski vacation and yet again we were thwarted!! 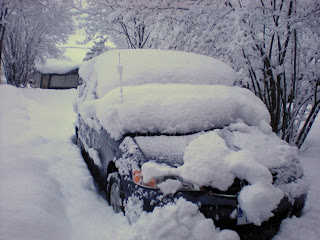 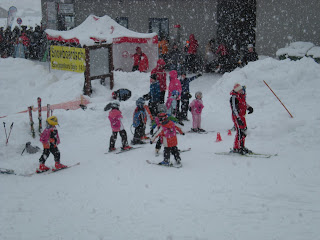 I had NO DESIRE to go anywhere during ski week since the kids and I had only been home 20 days since returning from our medivac in Oklahoma. In fact, I still wasn't finished unpacking! (Two huge boxes of excess "stuff" from my shopping forays to Target had just arrived and needed to be unpacked.) But some friends had reserved a cabin in German ski country that they couldn't use so they offered it to us. How could we say no?! The real impetus for me was when I discovered that Jad and Danna could be in ski school while Kyler was in daycare which would mean Kevin and I would be able to ski together, just the 2 of us!! With that goal in mind, I moved into travel mode and began to organize, pack, arrange, and make lists.

When we arrived at the Vacation Village in Garmisch-Partenkirchen, Germany, it was truly a winter wonderland --snow, snow, and more snow! This was a good omen! However, the first night was rough -- Kyler had trouble sleeping and had wheezy breathing --uh oh! So on Monday, instead of skiing with Kevin, I was at the German ER with Kyler. He had a fever of 104 F (40 C) -- YIKES!! For the next 2 days my focus was on Kyler -- keeping track of which medicine to give when, holding him lots, trying to keep him hydrated, letting him sleep in my arms, etc. Kevin focused on our "big kids" and getting them to and from ski school, outings to the indoor pool and library. Things went from bad to worse when Kevin developed a horrific cough and fever by Tuesday evening. On Wednesday Kyler seemed to have perked up a bit, so we went to the indoor pool but by lunch time Kevin and Kyler were in desperate need of rest. Those 2 took a 3 hr nap (!!!) while Jad, Danna, and I hung out at the local US army base library.

After a very restless night with Kyler, I threw in the towel and said it was time to go home. I needed to be back at home, in my environment, with my stash of medicine so I could focus on getting Kevin and Kyler well again. They are now both improving, but not back to 100% health yet. Kyler seems to have a combo of teething, flu, cough, and a tummy bug while Kevin has flu/cough/tummy bug but not teething!

So, will we attempt this again next year? You betcha! We'll be successful next ski season since 3rd time's a charm!
Posted by Erin at 10:07 AM

Kevin - i like your blog. Nice.
Webmaster - US Consulate Thessaloniki Greece