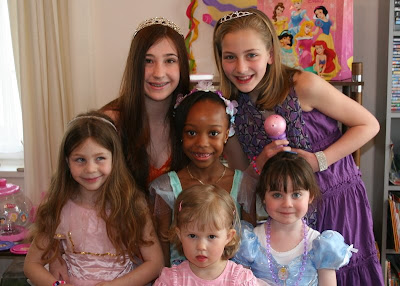 Her Royal Highness, Princess Danna Rachelle Rubesh turned four today. In attendance at her gala birthday event were royal ladies from other European monarchies, dressed in exquisite finery to befit the event. Stinky boys were banned from the royal household before the festivities got underway. 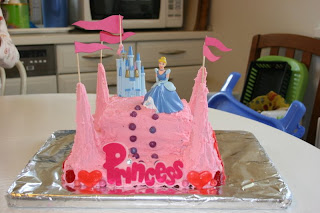 In this boy-free environment, the princesses enjoyed a wide variety of entertainment, including the manufacture of crown jewels (bead bracelets), the transportation of royal eggs (egg & spoon relay race), and "Obey the Royal Command" ("Princess says" - a variation on "Simon Says".) Organized activities were followed consumption of the royal birthday cake crafted by the Queengrandmother (visiting from the Kingdom of Oklahoma.)

Musical entertainment was provided by Princess Melissa, visiting from the Kingdom of Nave. She performed Princess Danna's favorite princess tune - Ariel's "Part of Your World."

Royal mothers conversed in the lounge while drinking royal coffees and teas. Towards the end of the celebration, the stinky boys were permitted to return to the castle, following their adventure to the IMAX theater to watch a dinosaur movie. Much running around ensued.
Posted by Kevin at 9:14 AM