Living without watching the news

For the most part, in the past 2 months I have not watched the news.  (Ok, there were the few days we stayed at a hotel in Washington DC and yes, I watched the news on TV.)  That doesn't mean I don't know what is going on in the world-- each day I look at the headlines on Google News. Let me just say there is a HUGE difference between watching the news and reading the news. 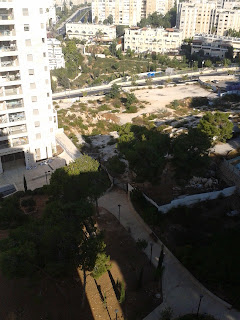 Yesterday I perused Google News more than usual because it seemed things were heating up.  Then I received a facebook message from a dear friend saying that she was going to be saying extra prayers for me and my family to stay safe. This led me to look out my my floor-to-ceiling windows to see how the "news" was affecting life in West Jerusalem.   I saw a mother pushing a stroller alongside a little kid riding his plastic Hot Wheels trike. There was another lady in work-out clothes (a modest long sleeved, long pants track suit) walking for exercise in the park. Another person was walking his dog.  I saw a guy on his balcony relaxing. Buses were going up and down the street. People were walking on the sidewalk carrying a briefcase or bag.  In other words, it all looked totally normal and like any other day in West Jerusalem.

So as you watch the news and their reporters, remember that they are interested in ratings.  They are going to say things that make you think the worst.  Then counter that with the view out of my living room window.  Life is going on as normal.  Not to say that  bad things can't happen, but it appears to me that the people in this country are prepared. Queen Elizabeth's advice seems to be the norm here: Keep calm and carry on.