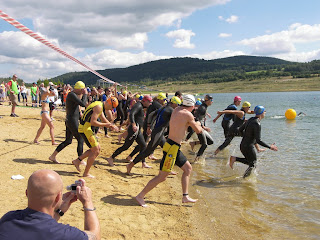 I finished 47th in a Triathlon this weekend. To be precise... my finish time was the 47th-best of all the non-junior category man racing the "Open" sprint-distance triathlon. Now, if you're thinking 47 is rather a large number... well, you're right.. actually.

To my credit though, it has been a long time since I've run one of these races... and I really haven't swum more than a lap or two since left the balmy waters of the Arabian Gulf... and - oh yeah... some of the other triathletes in the water on Saturday were actually members of the Czech Olympic Team! Anyway - my finish time of 1 hour, 25 minutes 41 seconds was a WORLD RECORD for people named Kevin Rubesh participating in this particular race. And it was fun!

One of my colleagues at work convinced me to join him in the Open Triathlon just a couple days before the race. The Open category was open (thus the name) to non-club racers, and was "just" sprint distance - 750 meter swim + 20 km bike ride + 5 km run. Because it was run at the same time and on the same course as the Czech National Championship race - an Olympic distance race going double the distance in each discipline - the Sokolov Triathlon attracted pretty large crowd - 140 competitors in total!

As usual, I came out of the water in about the middle of the pack, and proceeded to lose ground dramatically during the bike and the run. One fun bit about this race - since it was the National Championship - it was televised. This meant that while I was huffing and puffing along on my bike and on the trail, I was passed not only by elite Olympic athletes going at least double my speed... but also by the TV crew on motorcycle. Fun!

I actually made a brief appearance on the TV broadcast - hit play on the video clip to the right, and fast forward to minute 36 or so. Behind the woman being interviewed, you may be able to spot a tall fellow in a blue shirt walk across the screen, then plop down on the grass to stretch after finishing the race - yep, that's my grand entrance to the Czech National TV scene!

Being a Czech triathlon, the race was followed by an extensive raffle prize giveaway - including gifts such as homemade bread and salami, umbrellas, food baskets... and even a plasma-screen TV!

Unfortunately, this is the last race of the Czech Triathlon season... but I think I've just been re-hooked on this sport. My goal for next year? The coveted 45th spot on the podium (and some salami, of course).
Posted by Kevin at 10:32 PM