Jad and His Hair 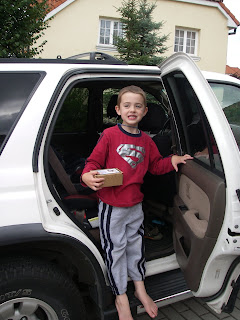 A couple of months ago I decided to expand Jad and Danna's music repitoire. (And Kyler's too, but he is too young to have a favorite song.) It was time to move beyond "Jingle Bells", "Twinkle, Twinkle Little Star" and "The Wheels on the Bus". So, being a good mother, I pulled out an oldie but goodie -- "Bob Marley's Greatest Hits". Ahhh...now this was music! Reggae at its FINEST!!! Nobody sings reggae like that famous Jamaican, Bob Marley!!

I put this classic CD in the car and it became a hit almost at once!! We quickly decided as a family that "Three Little Birds" was a favorite. This song has that familiar chorus "Don't worry, 'bout a thing; every little thing's gonna be all right." We have taken to singing that bit of the song whenever a crisis occurs, such as misplacing a favorite stuffed animal or when Kyler knocks over a newly built tower of blocks. Another favorite is "Buffalo Soldier". Since this song is about black slaves being forced to serve in the US army and fight Native Americans I guess I'll soon be explaining a tragic part of American History. But for the time being, Jad and Danna think this song is about a guy riding a buffalo and being a soldier. Ahhh...ignorance is bliss!!

So what does this have to do with Jad and his hair?? During his entire life of 5 years and almost 8 months, he has always worn his hair short -- buzz cut. In fact, since the age of 2, Jad and Kevin would go and get their hair cut together followed by a trip to the ice cream store. Recently Kevin planned to get his hair cut and when I asked Jad if he was joining his daddy, he simply answered, "No." I was rather shocked, so I phrased the question in another manner, "Jad, don't you want to go get your hair cut with Daddy?" Jad had a sincere reply ready, "No Mommy, I want to grow my hair like Bob Marley." So, next time you see a white skinny 5 year old with dred locks, it might be Jad!!