Blustery wind is tearing through the hills above San Jose, presents are arrayed under the tree, and the latest Christmas presentation is a wrap.  Turkey is defrosting the fridge, sugar cookies are coming out of the oven, and Christmas music is streaming  from the Internet.  Yep, it’s already been another year in Paradise.  As the Rubesh family prepares to celebrate our last Christmas in Costa Rica, it’s time for another whirlwind annual pictorial review of what’s happened in the last twelve months. 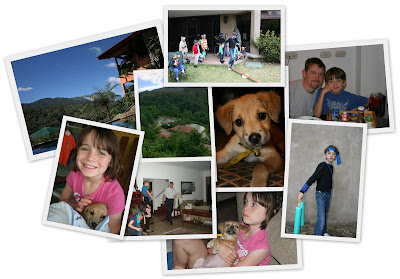 January started off with Kevin’s first-ever surprise birthday party.  Weeks of sneakiness, deceit and half-truths by Erin (all for a good cause, of course) succeeded in keeping the wraps on the whole thing.  The sneakiness continued with Jad’s 9th birthday party – starring Ninjas, home-made nunchucks and a complete regimen of Ninja training activities.  Kevin and Erin celebrated 4 kids, 12 years and 17 countries at the Peace Lodge (featured in “Honeymoon Hotspots International’s” top ten list, and not bad for an anniversary either).  And then… after years of resistance (and experiments with fish, turtles, bunnies, hamsters and guinea pigs) we adopted a “real” pet.  Sunshine is a 100% genuine purebred Costa Rican mutt carrying a pedigree from a long line of street dogs.  Of course a big “QUACK” went out to the Oregon Ducks football team who won the Rose Bowl. 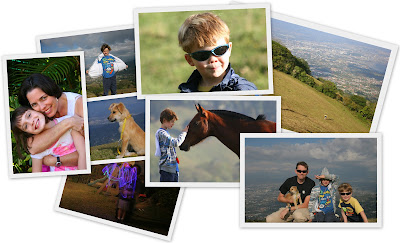 February was spent in training.  Training our family to clean up after the aforementioned purebred.  In between washing rugs and mopping floors, the boys took to the hills above our house in the mountains of San Jose to exercise the mutt and make friends with horses, while the ladies enjoyed a more refined Mother-Daughter Valentine tea. 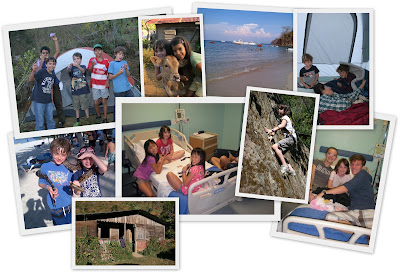 Moving on to March.  As all of you no doubt are aware, March 1st is Dr. Suess’ birthday – an occasion for real-life green eggs and ham.  Fortunately, a three hour cruise to Tortuga Island did not, in fact, result in a TV show a la Gilligan, but did feature a rather large snake.  March was also our second annual Boy Scout Family Camping trip, complete with waterfalls, rock climbing, sugar cane juice and a cow or two.  The “highlight” of the month, however, was spending a week in the hospital with Danna, whose Nephrotic Syndrome reared its ugly head.  It’s amazing what a Wii, a couple dozen friends, and a stack of DVD’s can do to a hospital room though.  PARTY CENTRAL at Hospital Clinica Biblica! 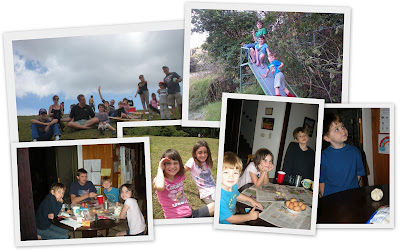 Danna made it home in time for Easter in April, and we went on a sledding trip.  Not on snow, mind you – this is Central America, after all!  Grass sledding, on cardboard boxes is almost as fun.  And not quite as cold (or expensive).

In May, we celebrated Danna’s 8th birthday – surrounded by friends and their stuffed “pets.”  We hiked through the coffee plants at Starbucks’ coffee plantation in Tiquicia.  Mother’s Day included a breakfast in bed and then lunch with friends at one of San Jose’s “miradors” (restaurants with a view).  May closed a generation, as we said goodbye and celebrated of the life of Kevin’s grandmother Jane, who died at age 85, surrounded by her five children. 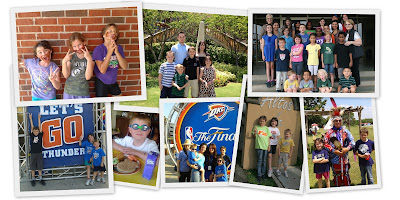 June brought goodbyes to friends and colleagues ending their assignments in San Jose.  The kids also bid farewell to school for the summer, and headed to the US to enjoy all that Oklahoma has to offer – including the NBA Finals, Native American festivals and swimming lessons.  A great time to connect with the Milligan side of the family - Tayta & Jiddo, uncles, aunts, cousins, and friends. 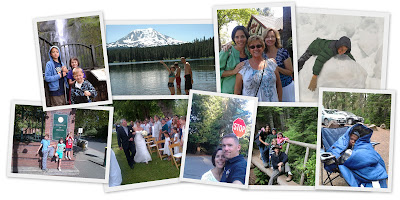 By the time July rolled around, Kevin was able to join the tribe in the Pacific Northwest. First we celebrated Kyler’s 5th birthday then we attended a family wedding and reunion extraordinaire in bucolic Trout Lake, Washington.  Cousins, uncles, aunts, friends and family from around the world gathered to welcome the latest Stephanie Rubesh (the 3rd) to the family, and celebrate the occasion as the Rubesh tribe does no matter where we are… by cooking up a Sri Lankan curry feast!  The rest of July was spent enjoying the wonders of an Oregon/Washington summer – from icy mountain lakes to snowy peaks to hiking trails and marshmallows by the campfire.  A “recruiting trip” to the University of Oregon landed us  with three prospective “ducklings.” 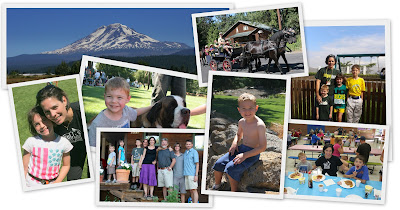 As August rolled around, we were still in the Pacific Northwest, enjoying the Trout Lake Festival, which included a family run (followed by a pancake breakfast), a parade, and zip lining.  Then it was back to Costa Rica, back to school and back to work. After a 10 year hiatus, Erin returned to the classroom, teaching 3rd grade math and PE at SEAS, where all 3 Rubesh niňos attend school. 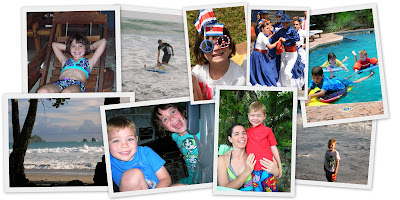 In September we celebrated Costa Rican Independence Day and also experienced a whopping 7.5 earthquake.   It was the strongest that's hit the country during our time here, and we definitely felt it!  Thankfully, the country escaped serious damage. Our friend, Sophie, came to visit from France which gave us an excuse to visit the beaches of Manuel Antonio. Jad and Danna both passed their online typing course and were awarded their own gmail accounts.  Thus start their lives on the Internet - oh my!  Our hearts sank as we watched the news of the attacks on the Consulate in Libya, which killed of our State Department colleagues.  One of the four who died did the same job as Kevin does, which made the tragedy strike very close to home. 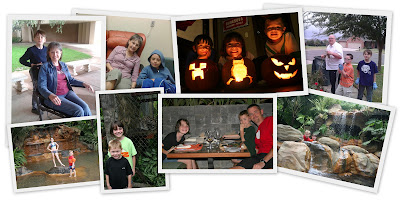 In October Erin and Jad made a week-long visit to Oklahoma to help Tayta (aka Erin’s mom) as she returned home from the hospital.  Kevin took this opportunity to take Danna and Kyler to soak in the hot springs at The Springs Hotel and Resort, one of the locales for “The Bachelor,” so we’re told.  Costa Rica experienced another earthquake, but it was mild this time, at "only" 6.6 on the scale. 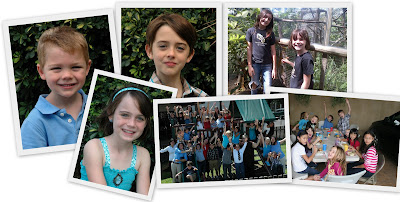 In November Danna and one of her school friends started volunteering at the Wildlife Refuge Center, cleaning out turtle habitats, preparing food for the macaws, and cleaning up monkey poop. We also received notice that our next assignment, beginning Aug 2013, will be at the US Consulate in Jerusalem.  And we celebrated Thanksgiving with 20 friends at our home in Costa Rica, complete with a Ginger-Ale basted Butterball turkey and homemade cranberry sauce. 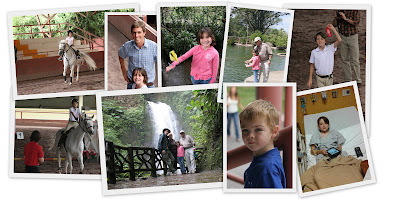 Early December brings the annual Christmas production at our church. This year all of us were involved in “The Greatest Gift”: Kevin sang a solo, Jad portrayed Joseph, Danna was an orphan with a speaking part (she got to hold a mic!), Erin helped with costumes, and Kyler watched us! On the same day as opening night of the play, Jad and Danna participated in their first-ever horse riding exhibition. Then to start off the Christmas break from school, Jad spent 2 days at Hospital Metropolitano due to an “asthma crisis”.  He was released in time to welcome his grandparents (Kevin’s parents) toCosta Rica. They’re celebrating Christmas Eve and Christmas morning with us for the first time since we’ve had children! 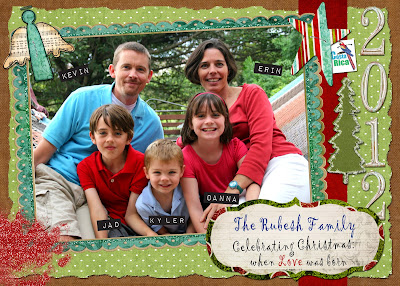 Which brings us full circle on another year.   From the Rubesh family in Costa Rica to you and your family, wherever in the world you are this year, warm greetings and a very Merry Christmas!