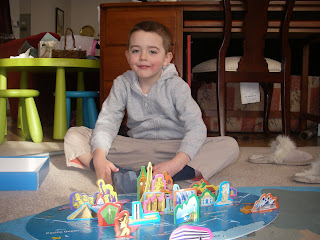 There is never a dull moment with Jad and Danna around. Yesterday was a glorious spring day -- clear blue sky, lots of sunshine, and a chilly breeze which all combined, just beckoned us outside. So, while Kyler napped, "the big kids" (aka Jad & Danna) and I ventured into our backyard to play. Our empty sandbox was semi-full of water from previous rain so that was an instant attraction! Jad decided to use the water to make rain (not the best choice) and Danna decided to use the water to fill up her buckets so that she could water the grass - very resourceful. After awhile the water ran out, so they moved on to the bucket of outdoor toys. Jad found 2 trucks and a shovel, which he immediately put to use in a patch of dirt. If that isn't a perfect image of "BOY", then I don't know what is!! Meanwhile, Danna found a pair of swim goggles, the kind that has each eye piece shaped like a starfish. She was convinced she had found a longlost treasure. So, wearing her coat, her gloves, and her hat she donned her yellow starfish goggles and pretended to be swimming in the sea. Such an imagination! It was such a beautiful moment-- so full of joy and happiness. I wish I could have somehow captured that moment properly, but such bliss can't be bottled up and saved for later.

Danna then decided to play a game of basketball with me, a former basketball junkie! I was quite impressed at how many baskets she made. Of course, the Little Tikes basketball hoop was not at the standard regulation height, but just half-a-head higher than Danna (who is exactly 1 meter tall). While playing, Danna informed me that when she grows up, she wants to play basketball AND be a mommy. After about 5 minutes of taking turns shooting and making baskets, Danna declared that she had won 65 to 2. Wait a minute!! I know I made more than one basket! But apparently she was the official scorekeeper as well! And since when has she been able to count to 65?? (Sesame Street only goes up to 20!)

Later Jad walked over to me and said, "Cacophony." I looked at him and with a puzzled voice said, "What did you just say??" He answered, "I said 'cacophony'. It means a really loud noise." And then he turned on his heel and walked away. I looked after him with such a feeling of love and pride, but also with such bewilderment. I'm quite sure I haven't used that word since my college days, yet how did he know it? And that is when it hit me that my "big" kids are growing up and I am no longer there one source of all information and knowledge. As much as I want to hang onto them, I realize that this is part of growing up (for them) and letting go (for me). I love my "big" kids!
Posted by Erin at 4:18 PM