Cyclone Gonu hit Muscat this week, leaving flooded homes, wrecked cars and widespread destruction in its wake. Cyclone? In Oman? Really - no kidding! It's the strongest cyclone ever to hit the Arabian Gulf - an area not known for many storms to begin with.

The first I had heard from friends in Muscat that there had been flooding, but the scale of things didn't hit home until I started seeing some pictures on the Internet today. Just to give you an idea... this McDonalds was one of the kids' favorites, since it had the biggest play area: 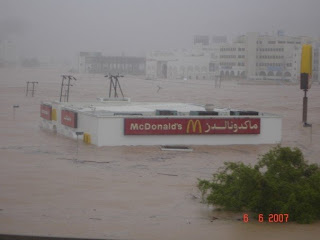 Here's one of Erin and my favorite Coffee Shops - one we visited many times on "date nights": 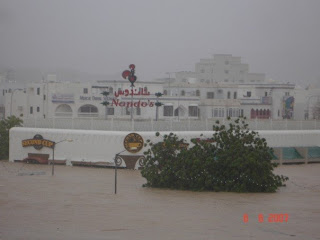 More pictures here on Flickr. Here's a pretty good writeup of some of the aftermath of Gonu in Muscat.

We just got word today that some good friends of ours had their house destroyed in a mudslide. Please be praying for these friends and others whose lives have been turned upside down by this freak storm.
Posted by Kevin at 2:02 AM