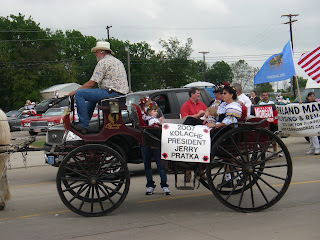 Yes, believe it or not, there is a Prague, Oklahoma! Some of the initial residents came from Czechoslovakia many, many moons ago. In honor of their heritage, they host the annual Kolache Festival. (Kolaches are a sweet pastry famous in the Czech Republic.) What better way to enjoy a weekend in Oklahoma AND prepare us for our upcoming move to Europe!! 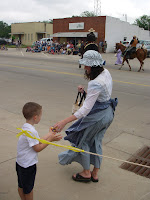 The festivities began with a parade -- the kind where the parade watchers (us) receive candy and sweets from the parade participants. Jad and Danna loved picking up the candy that was thrown at them! The parade itself was a mixture of Oklahoma heritage and Czech outfits. Jad enjoyed riding in a home-made train during part of the parade. (Danna was content to be held by her big cousin Christopher.) John Deere tractors made an appearance, as well as the local Harley Davidson chapter. We saw many, many cowboys on horseback, but an all-time new experience (for me, at least) was seeing cowboys ride steers! 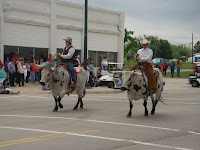 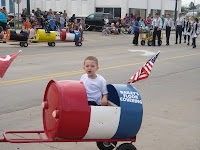 And no rural festival would be complete without a petting zoo. There were 5 black piglets, who were faster than lightening and seemed to weigh a ton! Also in the petting area were some gentle baby goats, but my two youngsters enjoyed the rabbits best of all!

For me, the highlight was meeting some people from the Czech Republic! They were very nice and friendly. When I asked if Czech was a difficult language to learn, they replied, "Don't worry, everyone in Prague speaks English!" Hmmm...not a resounding endorsement for an easy languague! I did learn how to say 'hello' in Czech, which is 'ahoy!' (as in Chips Ahoy).
Next time you're in Oklahoma in May, check out the Kolache Festival in Prague, Oklahoma. It is a taste of two cultures you wouldn't want to miss!!
Posted by Erin at 1:04 PM