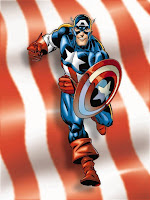 Jad told us this story the other day. Yes, he LOVES superheros!